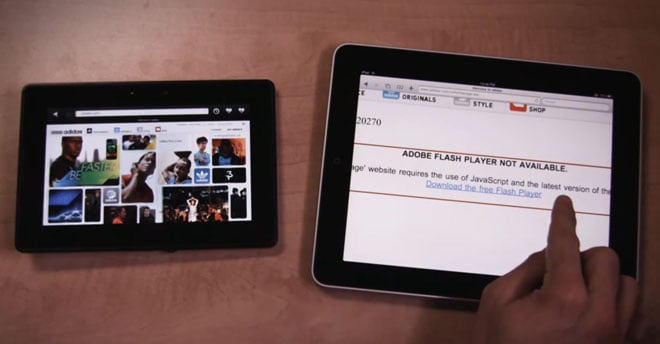 RIM just released a video comparing the browser on the BlackBerry PlayBook to the Apple iPad, and as you might expect, the PlayBook performs exceptionally well. It seems like they’re nitpicking a little big in the Acid3 test, but between load times, Flash support, and HTML5-based animation quality, it’s hard to argue with the PlayBook.

The PlayBook is RIM’s first tablet, and is armed to the teeth with high-end hardware: dual-core 1 GHz processor, 1 GB of RAM, 7-inch 1024 x 600 capacitive touchscreen, 5 megapixel camera on the back, 3 megapixel camera on the front for video conferencing, Wi-Fi, 3G via tethering to a BlackBerry smartphone, and HDMI-out. It also runs a brand new operating system by QNX which specializes in high-fidelity graphics, low power consumption, multitasking, and stability. Overall, the PlayBook is a hot little package, and will be landing sometime in February for between $300 and $500. As is, it can soundly compete with the Samsung Galaxy Tab, though it might have a tough time with iPad if having a big screen is a high priority.

Simply releasing this video is a pretty ballsy move on RIM’s part, but if you take into account how Apple has ragged on BlackBerry sales numbers and tried to rope them into the antennagate debacle, well, I really can’t blame RIM for schooling the iPad like this. Of course, a demo like this is very carefully orchestrated, and I would be curious to see similar tests done on more neutral ground.

As awesome as this looks for BlackBerry, the browser is just one aspect of either device, however significant it may be. The iPad still has a distinct advantage of an established and popular third-party application market, and considering RIM’s current footing in App World, they’ll have some catching up to do. Regardless, I’m still looking forward to the PlayBook’s release, and after seeing this video, it’s pretty much guaranteed that I’m getting one.

If you’d like to see more, be sure to check out the first live video demo from Adobe MAX.

Surprise, Surprise, the Beatles are now available on iTunes. While many won't care or already have the Fab Four in...