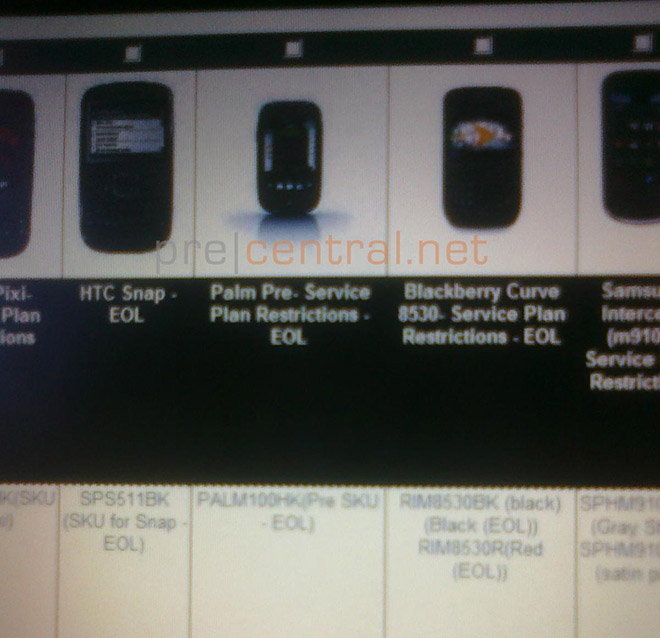 The Palm Pre recently disappeared from Sprint’s website and its disappearance kicked up rumors that the webOS handset was on its way out. This speculation was well founded as a leaked internal document confirms the EOL (end-of-life) status for the original Pre. From this point forward, the wireless carrier will sell its remaining inventory and will no longer stock the Palm handset.

The remaining inventory of the Pre is reportedly low, numbering in the hundreds, so this sell through should happen pretty quickly. In the interim, the wireless carrier will gradually remove all Pre and webOS advertising material from its stores and its website. Before we know it, all traces of the Palm Pre will be removed from Sprint. The entry-level Pixi will become the sole webOS handset in the carrier’s lineup and will remain be available for an indeterminate amount of time.

Much to the chagrin of die-hard webOS fans, Sprint has not commented on the possibility that it will carry the upcoming Palm Pre 2. Verizon is slated to receive the Palm Pre 2, but Sprint has remained silent on the webOS 2.0 device. This is surprising as Sprint and Palm enjoyed a cozy relationship in the past and the nation’s #3 wireless carrier was often the first to receive the latest and greatest smartphone from Palm. My how times have changed since the days of the Treo.

Those itching to get a Sprint-branded Palm Pre 2 should continue to ask about the device on the carrier’s Facebook or Twitter page, but your pleas may fall on deaf ears. Though this may sound like heresy, you may have to abandon this pursuit and switch to Verizon if you want to snag the second generation Pre.

Of course, you could exercise some patience and wait for one of those five mystery webOS 2.0 devices to land next year. Perhaps, Sprint is passing on the Pre 2 because the carrier knows something better is right around the corner. Anything is possible, no?

LG's Android-powered Optimus One is selling briskly and has hit the 1 million milestone just 40 days after the handset's...