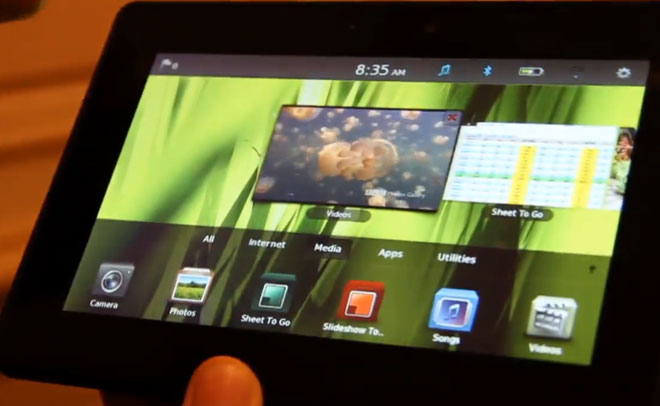 Aside from a prepared comparison with the iPad, the BlackBerry PlayBook tablet was a little camera shy at the Web 2.0 summit yesterday, but Engadget managed to score a few precious minutes with RIM co-CEO Jim Balsillie for a quick tour. The video doesn’t show too much that we didn’t see at Adobe MAX, but when asked about how they crammed a 5300 mAh battery in there prior to recording, Balsillie joked that it’s all glass and battery inside. We also get to see how apps are dismissed in a distinctly Pre-esque upward flick. Between the gesture area around the border, the card view for multitasking, and flicking up to close apps, it’s clear RIM has borrowed at least a thing or two from Palm’s webOS.

The BlackBerry PlayBook is RIM’s first tablet likely to launch in February for between $300 and $500. It boasts a 7″ 1024 x 600 capacitive touchscreen, 1 GHz dual-core processor, 1 GB of RAM, Wi-Fi, 3G with the help of a BlackBerry smartphone, and a brand new operating system that’s built for multitasking, multimedia, and stability.

The video of the PlayBook demo is below, ready for your scrutiny. How do you think it’s performing? As well as in the iPad comparison or Adobe MAX demo?

Update: Hey, here’s another video! It’s twice as blurry and half as official!

Aside from dropping the bomb that the BlackBerry PlayBook would have a module cavity to upgrade the tablet, RIM co-CEO...