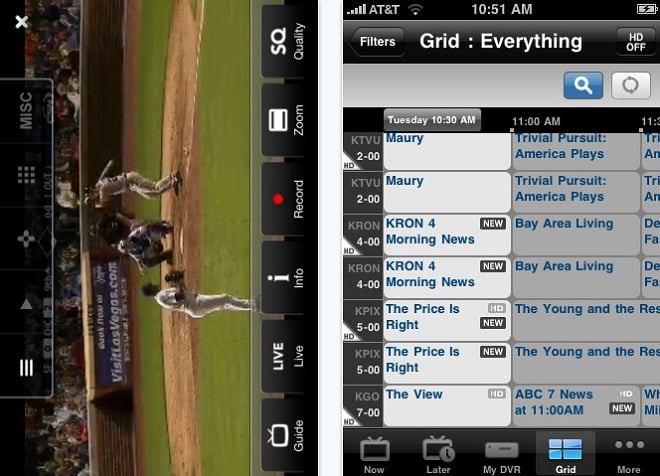 Dish Network is making a big push for TV everywhere, as the television provider is teaming with Dish to bring live TV to Android, iPhone, iPad, iPod touch and BlackBerry devices.

We knew the company planned this and most of the apps are now live. The Apple iPad version will be getting live streaming television soon, but, for now, it can still act as a giant remote control which can schedule your DVR recordings.

In order to get the Dish streaming TV to your mobile device, you have to have a Sling enabled set-top box. You can also purchased a Sing Adapter for about $100 and these apps will also give you access to your recorded content.

The Dish app for the iPhone and iPod touch is available in the app store today and you can download it here. When the iPad gets the live, streaming TV, it will be a formidable media device with this, Netflix, the ABC app and Hulu Plus.

Oddly enough, Dish says its Android app is “available for 4.3-inch display smartphones and tablets” but I was able to download the app for my myTouch 4G, which doesn’t have that large of a screen. It’s probably just a little jumbled wording in the release but let us know what your experiences are in the comments.

You BlackBerry fans can also enjoy live and recorded TV on the go but it’s only available for a few devices. You can download the beta app for the Bold 9700, Bold and Curve 8520 and 8900.

Remember, the streaming apps will work over 3G or WiFi, so you won’t have to miss That’s So Raven just because you’re not near a TV. You should be careful about streaming over 3G if you’re on a tiered data plan though, as this can lead to some heavy data usage very quickly.

Bell Mobility just announced that they've begun the first 42 Mbps network upgrade in North America, and will have a...