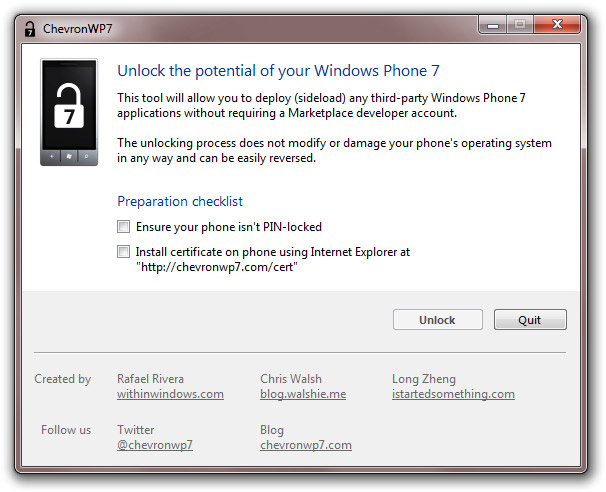 The folks at ChevronWP7 have released a tool to unlock Windows Phone handsets without a Marketplace developers account. The tool requires a Windows computer, a USB cable, and a few clicks to unlock the handset. For those who are having second thoughts about WP7 or must return their handset for service, the tool is able to re-lock the handset and restore everything back to factory. Similar to rooting and jailbreaking, unlocking a Windows Phone handset makes it possible to install any applications to your phone.

Currently, the ability to side-load an application is available only to developers who use this feature to test their applications. With side-loading now available to the public, a homebrew community built upon non-Marketplace apps can develop and flourish. These homebrew communities can extend the capabilities of a device and  help garner enthusiasm for a mobile platform. Cydia for iOS is a wonderful example of a thriving application community that is the direct result of being able to jailbreak Apple’s iPhone. The ability to install applications from Cydia is one reason why many choose to stay with the iPhone.

Right now unlocking may not have much appeal to the average Windows Phone owner, but give it time and a variety of apps will eventually appear. As with all unlocking tools, you should proceed at your own risk as a single mistake or an unexpected hardware failure can brick your phone. If you do unlock your handset, let us know how it goes in the comments.