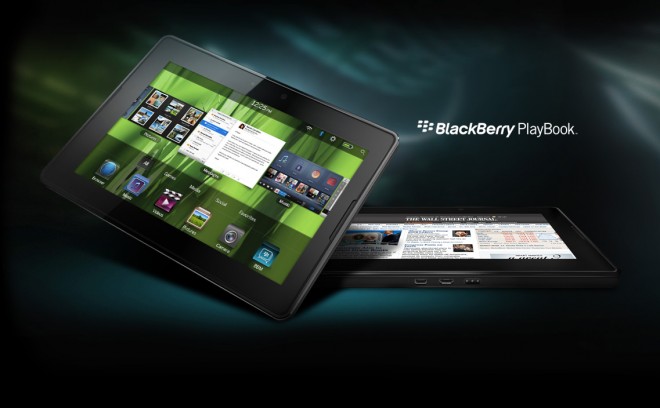 At an event showcasing tablets the other night, Rogers announced that they’ll be offering RIM’s BlackBerry PlayBook tablet early next year. They didn’t mention any specific pricing, but we’re guessing it’ll be around February for between $399 and $599, depending on how much storage you want.

For those unacquainted with the BlackBerry PlayBook, it’s a monster of a tablet. Clocking in with a 7-inch display and 1024 x 600 pixels, the PlayBook hosts a dual-core 1 GHz processor, 1 GB of RAM, a 5 megapixel camera on the back and a secondary 3 megapixel camera on the front for video conferencing. The most exciting part about the PlayBook though, is its software. RIM snatched up Ottawa-based QNX, who made a secure, stable, multimedia-friendly operating system that works like a charm on the PlayBook.

The thing is, the PlayBook won’t have 3G at launch – it’s Wi-Fi only, so why sell it through a carrier? As an expensive accessory? They could very well charge extra for people to tether 3G connectivity through their BlackBerry. The iPad was in a similar boat for a little while, but Apple had its dedicated stores (both online and brick-and-mortar) to sell their wares. It makes sense to a degree that RIM still leverages their established carrier relationships to sell the PlayBook, but this could have been an opportunity for RIM to bypass the carriers and all of the delayed OS updates and preloaded bloatware that such a partnership entails. RIM certainly doesn’t want to burn any bridges though, especially if they’re going to sell 3G and 4G modules through carriers for the PlayBook’s upgrade cavity.

Now that at least one carrier has confirmed that they’re selling the PlayBook, we can expect most of the major U.S. carriers in the U.S. will probably pick it up too. At least we won’t have to worry about waiting for a CDMA version to get cooked up. Anyone up here in Canada gonna snag a PlayBook from Rogers, or are you going to wait to see if the other carriers will offer it?

RIM has acquired well-known Swedish design firm The Astonishing Tribe. TAT has done a lot of mobile work in the...