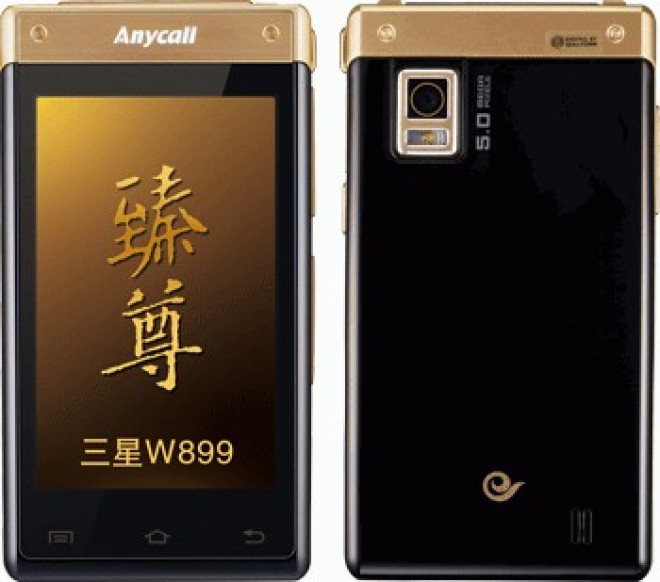 After seeing the Samsung Continuum, we knew we wouldn’t be surprised if it came up with another interesting form factor. Well, they have, and it’s all sorts of unique … in an ugly way..

The handset is being called the W899, looks like an old school flip phone and is quite large when closed. It’s sports two displays – both of which are decently sized – coming in at 3.3 inches each. When opened, the second screen is revealed on the top, and you’ll find a number pad, complete with the standard Android buttons on the bottom.

When closed, the front of the device looks slightly like the original Droid, only uglier. Nonetheless, those looking for a real numeric keypad may like the look of the device but did it have to be wrapped in such a bad package? Throw some curves on that thing!

One thing that is interesting – but something you’d  expect from a phone with two screens – is when you have the handset opened and then close it, whatever you were doing will appear on the front display. This is convenient but nothing ground-breaking here.

We’re still not sure what version of the OS the W899 is running but let’s hope it’s at least Froyo. Whenever this thing is released, expect it to stay in China for a while. If the W899 ever does make it overseas, let’s hope it’s heavily subsidized, or even free. I certainly wouldn’t want to be paying a lot for something so unattractive.

Either way, I do actually applaud Samsung for continuing to make interesting form factors with their handsets, even if I would never want one. That kind of diversity may end up paying off for the company. Then again, it could also go rather badly for it as well.

CyanogenMod 6.1 goes final – Gingerbread on the way with CM7

CyanogenMod is one of the most loved custom ROMs available for Android OS, and we're happy to tell you that...