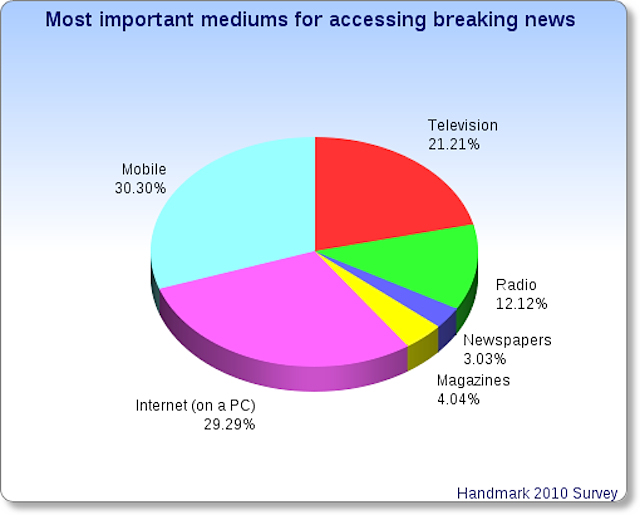 The rate at which smartphone use has been growing steadily rises each year, and as a result, we see a lot more trends moving towards mobile. Payments, social networking and shopping are just a number of things that many consumers are beginning to do on their mobile devices and smartphones, but it looks like they also prefer getting their news there, too.

As a matter of fact, it seems the trend is moving towards getting breaking news from mobile devices compared to TV, newspapers and desktop web browsers. Obviously, when news is breaking, it’s easier to access it from your mobile device. The thing about breaking news is that it doesn’t always happen when you’re conveniently at home or near a TV or computer.

In a survey of 300,000 mobile consumers, 88% of whom owned a device running one the five most popular smartphone operating systems, more than 30% said that mobile is the “most important medium” to access breaking news, narrowly followed by desktop web browsers (29%), television (21%) and newspapers (3%).

It’s interesting that nearly a third of respondents said that mobile is a more important medium for accessing breaking news compared with all the older and more traditional mediums. Again, the convenience of getting the news from one’s smartphone is probably largely the cause for the trend here, and the fact that many news sources have dedicated mobile applications and even offer push notifications for breaking news. (This morning, my iPhone woke me up at an ungodly hour with a push notification from the AP telling me Julian Assange was arrested. Thanks, AP!)

Also, in order of importance the top three types of news accessed by users from their smartphones or mobile devices are news and events, weather and sports. Bringing up the rear are business, entertainment and politics in their respective order. I guess we all have our priorities, and it seems entertainment is more important while on the go than reading about boring old politics.

With the use of smartphones and tablets on the rise, I would expect these numbers to be dramatically different in 2011. While it’s always hard to predict, I wouldn’t be surprised if just over half of mobile consumers prefer to get their news from their devices versus PCs, TVs or newspapers.

Steve Jobs versus the Beatles retold in BBC comedy video

After a day's worth of Android and enough Gingerbread news to keep us full until Christmas, it's time to take...