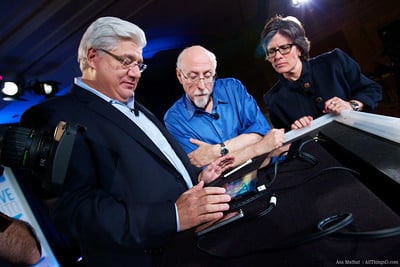 RIM’s co-CEO Mike Lazaridis showed off the BlackBerry PlayBook tablet yet again for a WSJ conference last night, where he ferociously (and sometimes confusingly) defended the present and future of RIM. From the edited video below and some of the liveblogs, it seems that he was trying to contort canned lines into responses that nobody could understand. That’s par for course – I get that feeling whenever RIM spouts off “POSIX-certified” or “symmetric multiprocessing” when talking about the PlayBook.

Lazaridis’ general reply to the aggressive questioning about BlackBerry losing market share is that RIM is addressing a global market, and for North America, they’re looking to multi-core smartphones capable of running the PlayBook’s QNX-based operating system in the future. We knew QNX was coming to smartphones sooner or later, but Walt was unable to squeeze a timeline out of Lazaridis. As for the PlayBook, though he classified the size as “perfect”, said they were looking at a bunch of options for their next tablet.

The big pitch for multi-core processors is reduced power drain, but I think it’s a bit misleading to suggest that multi-core CPUs on BlackBerry smartphones are new. The original BlackBerry Storm used a multi-core Qualcomm MSM7600. Sure, it only clocked in at 528 MHz, but RIM tried that strategy, and it didn’t work out so hot, as some of you might remember. One can only hope that since then enough has changed in their engineering to make multi-core handsets viable and stable. On the tablet side of things, the possibility of a PlayBook with a bigger screen that runs just as nicely will definitely appeal to media junkies who would rather the added bulk and perhaps reduced battery life for the sake of more visual real estate.

The question period did seem a little harsh, but not unduly so, considering how little of an upgrade OS 6 was to the core BlackBerry experience and how far away a more significant smartphone upgrade from QNX is looking. The competition is stiff, what with Google and their legion of manufacturing partners pushing Android, and Apple with a whole generation locked in to its lifestyle, ranging from computers, to music, to the iPhone. Taking this interview into account, how do you guys think RIM’s future looking?

Here are the videos of the BlackBerry PlayBook demo and the highlights of the interview.

P.S.: Good work on the conference name, WSJ. We’re really into it.

Comcast is making a big push in the mobile space and it has just released its Xfinity app for Android....