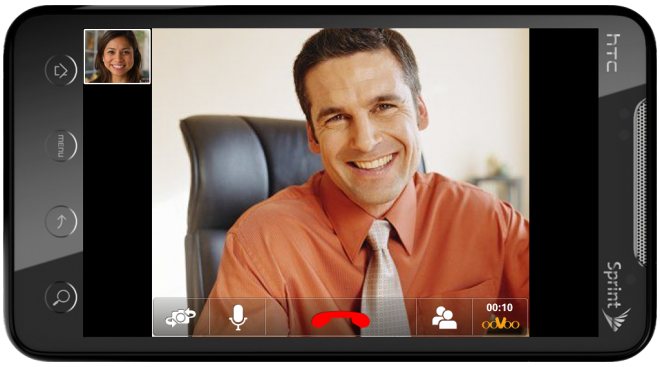 ooVoo has just launched a their first mobile video chat client for Android, letting up to six users on the same call at once. That alone doesn’t make it a significant competitor to Qik, though – it also has a lot of technology on the backend that allows it to handle large video conference calls with ease. Calls can be made over Wi-Fi, 3G, or (ideally) 4G. You can gather up your contacts from instant messaging clients or social networks, and if you’d rather not do video calls, you can do text-based instant messaging or voice calls too. The kicker with ooVoo is that it’s a cloud-based solution that uses servers to juggle up to six different video calls at the same time. What you get is a high quality video stream that adapts to your network conditions.

The mobile video calling space promises to be big business in the long run, with players like Apple, Fring, Qik and Skype all getting seriously involved. I still have trouble imagining practical situations where I need to see someone face-to-virtual-face on my phone, but maybe these companies can introduce some use cases other than business meetings where you need to show products or flowcharts.

Six people seems pretty excessive, but for particular situations, very helpful. It’s hard not to worry about what real-world performance would be like with six people on the same call; even within a Wi-Fi zone, that’s a lot of streaming video for one tiny phone to handle. ooVoo solves this problem by offloading the processing of the video to their servers, which handle all the heavy lifting and push optimized data down to your phone. ooVoo serves up only one video feed at a time, but you can quickly switch between up to five other video feeds seamlessly. ooVoo tells us that in the future they’ll update their interface to include live video thumbnails. What you end up with is a video chat client that can realistically serve as a virtual conference room.

Cool stuff overall, and a definite contender for anyone serious about mobile video calling. You can get more details over at ooVoo’s homepage.

Android 2.3 Gingerbread OS has finally gotten real, well, at least for those of us with a Google Nexus S...