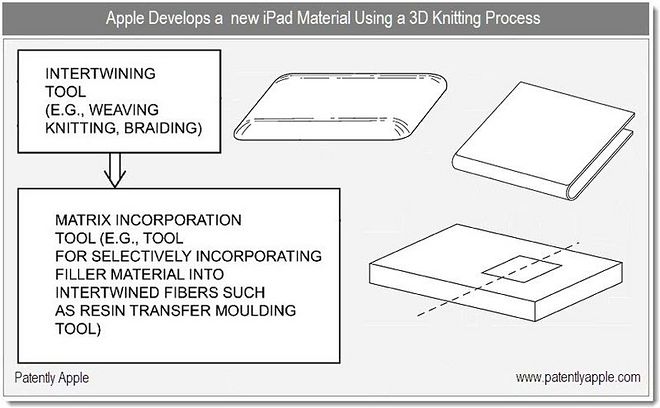 Apple had recently been granted a patent for an “Improved Laminate Composite” that would provide a lighter and stronger material for the iPad and future devices. We saw a patent last month that hinted at carbon fiber iPads in the future, and now we’re seeing just how Apple might be constructing materials such as carbon fiber for future products.

Laminating and constructing materials using fiber is pretty difficult, but it looks like Apple may have found a solution to that with a new manufacturing method. The patent it was granted shows a 3D “knitting” process for the manufacture of fibers that could be made of a number of things: glass, plastic, metal, etc.

Beyond the iPad, an example of an electronic device that may be formed from intertwined fiber structures, could be a pair of audio headphones.

Additionally, the new materials that could be constructed out of the process could also be used for making products like folio cases.

It’s pretty neat stuff coming out of Apple, and a further reminder that the company cares about its manufacturing processes and materials. There really is no beating around the bush–other manufacturers seem to care less and less about what they’re putting out there. New handsets being put out, devices of the “future” like the Nexus S, feel so cheap and poorly made. When these devices are going for hundreds of dollars off contract, wouldn’t you want it to feel like hundreds of dollars in your hand?

If you've been keeping an eye on the App Store, specifically the Games category, then you'll know the floodgates have...