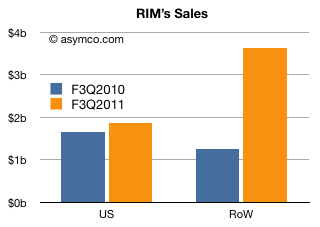 After chewing through some of the numbers in RIM’s quarterly conference call yesterday, one report has figured out that 92% of BlackBerry sales growth comes from outside the U.S. The U.S., U.K. and Canada combined made up 56% of RIM’s revenue, while the U.S. alone was 34%. In terms of how much of an improvement that is historically, US revenue wen up 13% from the same time last year ($1.65 billion to $1.87 billion), even though overall RIM’s revenue grew 89%, or $2.6 billion year over year. That being said, the U.S. only accounted for 8% of RIM’s increased revenue while the rest of the world grabbed 92%.

Co-CEO Mike Lazaridis has certainly tried to defend RIM’s international strategy, citing the global necessity for 2G-friendly smartphones, while the press tends to hammer them for failing to compete with Android and iPhone in North America. Now, whether you think this trend is a good thing or bad thing is your call; as sad as it might be living in North America and seeing all of my BlackBerry buddies switch over to Android, it looks like RIM stands to make a lot more money by providing cheap, accessible smartphones for emerging markets. Besides, as a Canadian company, BlackBerry wouldn’t have had such a strong presence in the U.S. if they weren’t thinking about a global market. Though their smartphone picture is shakey for the time being, Nokia became king of the hill for gunning for the bottom in emerging markets with feature phones, and there’s no reason BlackBerry can’t do it with smartphones.

Maybe I’m a little too optimistic, but as long as RIM continues to post record quarters, I’m wouldn’t pay the doom-criers much heed, especially when once iPhone and Android have maxed out their North American expansion, they find most markets elsewhere in the world captured by RIM.

Rumour has it that Research In Motion is going to continue their shopping spree (see The Astonishing Tribe, QNX, Viigo,...