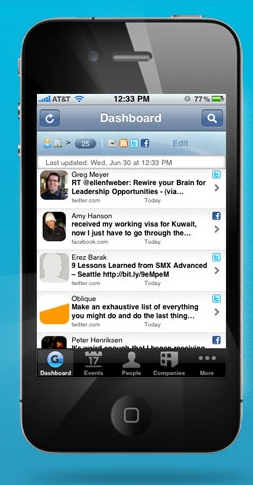 Rumour has it that Research In Motion is going to continue their shopping spree (see The Astonishing Tribe, QNX, Viigo, Torch Mobile, Chalk Media, and Dash Navigation) by snatching up a contact management app developer called Gist. Supposedly the deal is all but sealed, but even if it happens, it might be too small of an acquisition for RIM to need to announce.

So what does Gist actually do? They make CRM software that amalgamates information on contacts into a unified dashboard. Information isn’t just pulled in from the usual places like e-mail, contact databases, LinkedIn, Facebook, and Twitter though; Gist also scours the net for blog posts, news items, and social network updates relating to those contacts. Contacts can be tagged with particular topics, which will place that contact into a big cloud of related people and news surrounding those topics. Correspondences also get a priority score based on how often you’re in touch with any particular person. Overall, it’s probably not something your everyday consumer is likely to use, but seems like a helpful tool for analysts, PR people, CEOs, investors, and maybe even us bloggers. Here’s the a quick video run-down. Currently, Gist has Android and iPhone (link below) apps, with a BlackBerry app in the works.

There are a lot of apps in this space, like Sensobi, Xobni, Rapportive, and eTacts so I can’t help but wonder why RIM is particularly interested in the one that doesn’t even have a BlackBerry app yet. Still, it could result in an even richer address book in a future BlackBerry OS or QNX. As is, the BlackBerry’s address book plugs into the major social networks and instant messaging clients, but if there was also an option for a native priority inbox and added context farmed up from whatever can be found online, it would certainly raise the bar. No doubt there would be some interesting BES/Exchange integration there too.

The chorus spouting a Verizon iPhone in the works for early 2011 is getting louder. First it was the Wall...