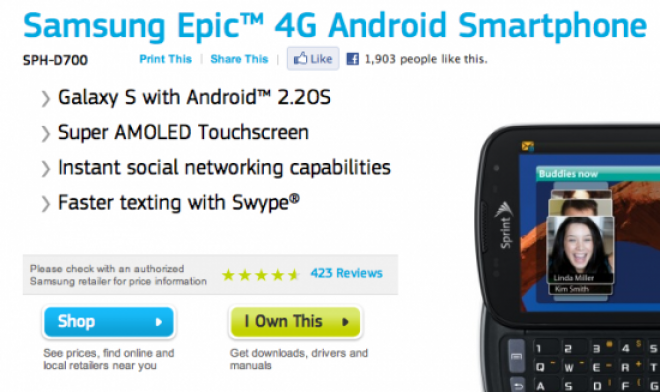 The massively popular Samsung Galaxy S is still awaiting the Froyo update here in the US of A, but a recent slip up on the Samsung website may prove that the Android 2.2 Froyo update is not too far away. Although, at this point, aren’t we waiting for Gingerbread now?

The product pages for the Vibrant, Fascinate, and Epic 4G were spotted with references to Android 2.2 OS, but the mention of Froyo has since been pulled and replaced with references to “Android 2.1.” We have to wonder why would Samsung include Android 2.2 Froyo in their device specs if these updates weren’t right around the corner? We’re still not sure, but we hope these devices can get some sort of update pronto. They need it. It would be nice if Sammy chose to skip Froyo all together in favor of Gingerbread, but that would only make users wait that much longer.

Whether or not this was an attempt for the Galaxy S to stay in the news cycle is up for debate, but nonetheless, it worked. The Galaxy S phones are great, but have been overshadowed lately with the prospects of the Galaxy S 2 possibly being announced at CES 2011. It’s like buying an iPhone in May when a new one will be announced in June.

So whatever is up Samsung’s sleeve better happen soon, as Galaxy S owners are becoming a little frustrated with Android 2.1. Features aside, the best thing about Froyo is the big boost in speed, and the Galaxy S phones could greatly benefit from the JIT compiler in Android 2.2.

So while we wait for users to get some sort of update to their devices, we at least know that Samsung should be announcing some new products that may make us momentarily forget that the Galaxy S is still lagging with Android OS updates.

Good news for San Francisco Bay Area residents, Sprint 4G is now available in your locale! Right on time, the...