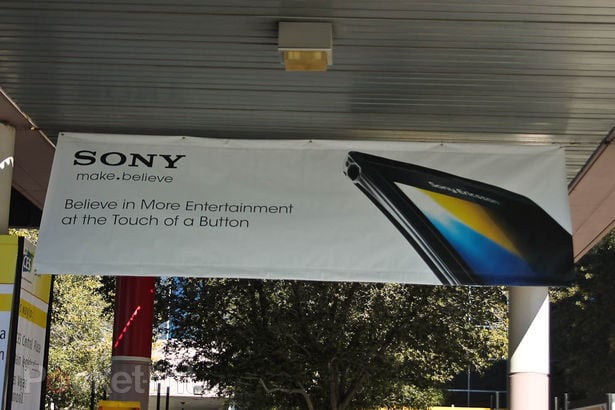 We have our fingers crossed for the launch of Sony Ericsson’s PlayStation phone at CES, but even if it doesn’t go public until MWC next month, it looks like the Xperia X12, code-named Anzu, will most likely be announced this week. A few banners around the Las Vegas Convention Center are showing a glimpse of an extremely slim handset with a 3.5mm headphone jack in the top-left corner.

Although it’s hard to tell with so little to work with, odds are good that this is the Sony Ericsson Xperia X12, which should launch with Android 2.2, have a big ol’ 4.3-inch display, HDMI-out, and a 12 megapixel camera with 1080p HD video recording. The X12 will be taking the reins from the X10 as Sony Ericsson’s flagship big-screen Android phone, but it has an uphill battle against the Galaxy S series which has had some time to win over customers and lock them into new contracts.

Whatever Sony Ericsson announces this week, you better believe we’ll have our boys snapping pictures and shooting videos of the phones at CES. The real fun starts tomorrow!

The upcoming PlayStation phone (or straight-up "Play", if you will) has been caught again under the camera, this time with...