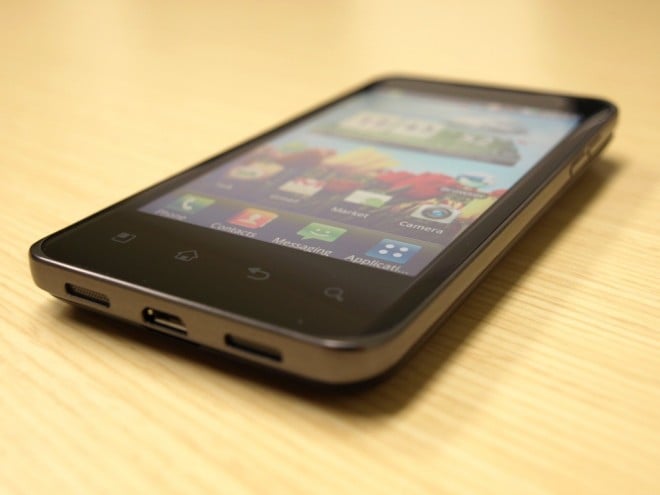 There’s been plenty of talk about NVIDIA’s dual-core Tegra 2 “superchip” powering the next-generation of Android tablets (and even car navigation systems), but you may not know that smartphones like the LG Optimus 2X (Star) will also hit market in the very near future with the same power-packed internals. With a 4-inch WVGA display, dual-core Tegra 2 processor, HDMI-output, and the ability to record video in full 1080p HD resolution, the LG Optimus 2X is no slouch in the performance department. We had a chance to get down and dirty with the very first Android phone to sport the Tegra 2 dual-core powerhouse, and it’s hard not to be impressed.

For starters, the LG Optimus 2X (which is also known as the “Star”) feels like the premium product that it is. LG has had some trouble making a name for itself in the high-end smartphone market. With the introduction of the iPhone and the plethora of Android phones becoming available, the struggle to succeed in the upper echelons of the smartphone space has gotten more and more difficult. Build and construction quality (as well as materials used) go a long way in making a handset “feel” like a high-end product. From the device’s apparent density to the curved glass display, the LG Optimus 2X proves that LG still has what it takes to compete on this level.

Then, there’s the performance. You won’t see many other phones outperforming (or even matching) the LG Optimus 2X in terms of multimedia and gaming. You can thank NVIDIA and their dual-core Tegra 2 silicon for that. The applications processor runs faster and more efficiently than other 1GHz processors, allowing Android OS to run as smooth as we’ve ever seen. And, when it comes to gaming, NVIDIA’s experience with graphics processors gives the Tegra 2 chipset an edge when it comes to 3D graphics.

Top that all off with a camera that can shoot 8-megapixel images and 1080p HD videos at 30FPS, and it’s clear that the Optimus 2X is a serious contender. Oh, and you can output the display to an HD display or TV in full 1080p resolution. And, you’re not just limited to outputting pictures and videos via the HDMI-out port. The “mirror display” feature allows you to show your homescreen, video games, Google Maps, and anything else on the phone’s screen on your bigscreen TV.

The LG Optimus 2X will be available in the near future. For the time being, enjoy our hands-on video and photo gallery below!