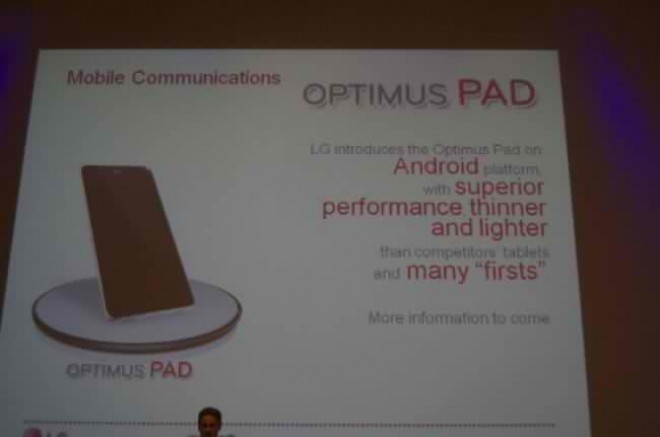 It’s been an avalanche of tablets here in Vegas ever since we landed and while most people are waiting for Motorola to announce its Xoom tablet, LG will definitely be bringing us the Optimus Pad tomorrow. Will it have what it takes to take on the Xoom and the rest of the Android rivals?

Tomorrow is officially the first day of CES, and we don’t expect it to be anything less but insanely good. If LG announced some quality hardware, no longer will they be known in the Android space for the questionable Ally or Eve. We know that the Optimus line has been doing well so far, but we’re waiting on some good hardware. We’ve seen the Star, but we’ve yet to see anything of the upcoming tablet we expect tomorrow. We’re ready to hear what the fuss is all about.

LG was smart to hold off on releasing an Android tablet, as waiting for Honeycomb may pay off in big ways. As nice as the Galaxy Tab may be, we wish Samsung got that memo, too.

Little is known about the Optimus Pad, but we do remember that LG said it would come with many “firsts.” We have no idea what that means, but we imagine it’s a good thing. The device may sport an 8.9 inch display, which sits nicely in between the iPad’s 9.7 inch display, and the Galaxy Tab‘s 7 inch display. We know very little outside the Android version and possibly screen size of the tablet, but we also expect to see some dual-core action in the form of NVIDIA’s Tegra 2 as well.

We’re certainly glad that LG is stepping up its game, as it was hard to remember the last handset I’d consider purchasing from the manufacturer. Now they’re swinging hard by bringing some top-notch handsets and what sounds to be a great Android Honeycomb tablet to market. LG has the name and clout to run with the big dogs, so lets hope its execution is as solid as it seems to be.

Anyone looking forward to seeing what LG has been cooking up?

You can follow all of our CES coverage by clicking on the CES 2011 section.