We’ve seen an awful lot of RIM’s first tablet, the BlackBerry PlayBook this week at CES. Now that they’re finally letting us actually touch the thing, most of the initial impressions have been positive, but one really big problem has come up: you can’t fetch e-mail or access other personal information management data (address book, BBM, memos, calendar, and tasks, for example) in their native apps without pairing it to a BlackBerry smartphone in a process they’re calling Bridge. Bridge doesn’t so much as sync data on both devices as it simply explodes information stored on the handset onto the bigger screen. As soon as they’re unpaired, the PIM data on the PlayBook disappears. This means if you have anything but a BlackBerry, the Wi-Fi PlayBook might not end up being an optimal standalone product, unless you hold browser-based apps and everything but PIM in high esteem.

The first hint of this eventuality goes back to the PlayBook’s announcement at DevCon and stretches through RIM’s ongoing marketing of the tablet as the first enterprise-ready tablet (that can apparently play Quake). However, RIM had said back then that the PlayBook wasn’t going to be managed by BES controls, which to me was the spitting definition of being enterprise-ready; wasn’t that RIM’s entire sales pitch? At that point it was obvious that the PlayBook might be enterprise-tolerable, but “ready”? Without granulated policy control (i.e. this guy can do this on his device, but that guy can only do that) at launch, “ready” might be going too far. It was also announced that the tablet would tether to a BlackBerry smartphone, but at the time it was assumed that this would be strictly for 3G connectivity, not also for stuff we took for granted like e-mail (though technically, the 3G tethering and Bridge will be two different things altogether).

This whole Bridge business is really tragic because everything else about the PlayBook is so great. It includes a responsive 7-inch 1024 x 600 display, a 5 megapixel camera on the back, 3 megapixel video camera on the front (both HD-capable), a dual-core Cortex A9 1 GHz processor, 1 GB of RAM, and purpose-built OS that can handle live, multiple 3D renderings without breaking a sweat. Best (or worse) of all, the thing is actually sexy, something BlackBerry hasn’t been able to boast since… Well, ever. Here’s our hands-on tour.

Now, end-users (especially ones without BlackBerry smartphones) will not be happy about the bridging requirement to get e-mail and other essential PIM data on the PlayBook in an app environment, and RIM must know that. Sure, there will be browser-based solutions in the interim, and no doubt the browser will be able to handle a fair bit, but it won’t compare to a native app. There must be even more important people (yes, more important than the people that would use the PlayBook day-to-day) that RIM needed to please to drive them to implement Bridge. The biggest one is corporate CIOs. Having a whole separate class of devices for them and their Enterprise Server admins to manage would be a pain, especially if it involved multiple instances of single identities (two PINs for one person). By setting the PlayBook up as something little more than a Bluetooth peripheral that stores no important data locally, security-conscious admins wouldn’t have to worry about PlayBooks sneaking off or getting lost, and them having no way of recovering or destroying the information contained therein. The fact that it’s a Wi-Fi-only device may also be a part of the issue; it would be hard for a BES admin to remotely wipe a PlayBook if there was no cellular connectivity whatsoever, especially if a clever thief left Wi-Fi off and never plugged it into an internet-connected computer. If Wi-Fi is the reason for Bridge, then maybe the WiMAX PlayBook coming to Sprint will herald a software upgrade that gives the tablet standalone secure e-mail capabilities on its own, hopefully along with some proper BES support. A recent video from RIM certainly indicates that smartphone-independent PIM apps would become available “as the platform evolves”.

One thing some of you guys might not know is that if you don’t have an active SIM card (or activated EV-DO account) in a BlackBerry phone, you can’t even use it on Wi-Fi alone – the device is that dependent on the carrier, and that’s one of the many reasons carriers love RIM. If some kind of carrier authentication is required to get onto RIM’s extensive NOC back-end (which compresses and pushes BlackBerry e-mail data, among other things), then RIM may have needed to Bridge to save face. After all, if the PlayBook launched with the only alternative, plain ol’ IMAP e-mail like any other smartphone or tablet, RIM would basically be admitting that their gigantic, bulky infrastructure wasn’t entirely necessary to make a good product. Although I doubt that alone pushed them to make the Wi-Fi PlayBook dependent on the smartphone for e-mail, it seems likely to be a contributing factor. 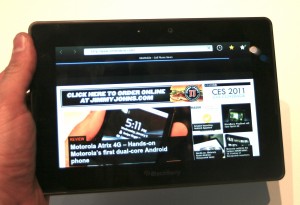 Ostensibly, a Wi-Fi only tablet could threaten RIM’s relationship with carriers by offering a rich wireless experience without giving the carriers a cent, but clearly RIM doesn’t want to burn any bridges (especially if they need retail partners to push the PlayBook). So in comes Bridge to the rescue, gutting core functionality unless you have a wireless data plan, specifically on a BlackBerry. This partially addresses why RIM didn’t just come out with a 3G version right out of the gate – the PlayBook is supposed to be a second device, and as such, it’s assumed you already have wireless data. Once those shoppers buy in and get one, then the only customers left are the ones who want a cellular-enabled PlayBook to replace some of their BlackBerry smartphone’s usual functions, like e-mail.

Although separate from Bridge, the BlackBerry tethering with the PlayBook is implemented very much in the same spirit. If the PlayBook’s tethering action goes through the exact same pipes as tethering to a laptop computer, then service providers will be able to detect, and appropriately bill for tethering data usage. Carriers won’t have to make up some new complicated secondary device sharing plan and all the hassle that comes along with splitting up accounts with multiple SIM cards; they just charge for more data, apply the added surcharge for tethering, or whatever it is they usually do for their standard smartphone-as-modem service. Even if the carriers are merciful and don’t force additional charges to share data from a BlackBerry smartphone to the PlayBook (who knows, maybe carriers won’t be able to tell which device is using it), the fact is you’ll still need to be paying some kind of wireless service provider to get core functions on a Wi-Fi-only device, which, if made by any other manufacturer, would stand on its own with no strings attached.

Another party that stands to gain from tying the PlayBook so tightly to the BlackBerry smartphone is RIM’s bank account, and by association, their shareholders. If people are buying BlackBerrys solely for BBM, then surely they’ll pick one up just so they have an excuse to buy a snazzy tablet, too. In this way, the PlayBook becomes a selling point for another product, rather than a product itself. The lapdock launching with the Motorola Atrix is very much in the same boat. The iPad and the various Android tablets that launched at CES are fine devices in their own right, but the overlap with smartphones is so considerable that there’s a risk of cannibalizing sales. By building in a dependency between the two product categories, RIM doesn’t only protect against that cannibalization, but capitalizes on the relationship. Instead of encouraging buyers to get either a smartphone or a tablet and making a few compromises one way or the other, RIM is trying to steer folks to buying both to have the full circle of functions. To boot, existing BlackBerry smartphone owners will already be warmed up to the idea of getting a PlayBook with the knowledge that the phone they have fills a vital gap in the tablet; that same dynamic will exclude anyone using another smartphone platform, but again, that’s a pressure RIM has already happily applied in their marketing with BlackBerry Messenger exclusivity. 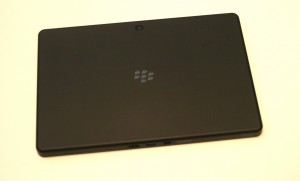 Until RIM eventually includes a standalone e-mail client for the PlayBook, there’s always browser-based portals, and who knows, maybe Google will be nice enough to bring that lovely tablet-optimized Honeycomb Gmail client over to the BlackBerry tablet. If they don’t, there’s the hope that some other third parties will step in to provide an e-mail app which doesn’t need to Bridge and can work on Wi-Fi alone. Such a thing is not entirely unheard of in the BlackBerry universe; you might recall a product by the name of BBSmart, which enabled HTML e-mail rendering on RIM smartphones before they built it into the OS proper. In that particular instance, someone other than RIM was providing something that BlackBerry really should have had all along. Third-party alternatives are really no substitute for a RIM-built experience, but the big ol’ gap gives something for developers to fill, who stand to be the fourth winner of the PlayBook’s Bridge. By leaving the tablet bereft of core functions when unpaired, devs will be scrambling to provide solutions that keep people happy who just want to get their damned e-mail on their tablet without having to turn on Bluetooth on two separate devices first. On top of that, there will be plenty of people who want the PlayBook to work with smartphones other than BlackBerrys. Plus it’s not just e-mail, either – no contacts will be locally stored, neither will memopad notes, nor tasks. That’s all opportunity for third-party devs to step in and make lots of money – a reputation RIM needs to cultivate if they want to drag developers away from iPhone or Android. Just don’t expect anyone to make an unbridged version of BBM; we’ve all seen what happens when devs try to move in on that little crown jewel.

If Bridge leaves the PlayBook without native e-mail or contacts apps when unpaired with a BlackBerry smartphone (at least for the immediate future), then RIM’s first tablet will be a mostly defensive maneuver to keep existing BlackBerry owners locked-in and invested in the platform, and in a distinctly Apple-esque way, force anyone who wants to use the tablet to play 100% by their rules. Once that defensive line has been drawn, a more independent 4G PlayBook can go after those who have already picked their smartphone camp elsewhere. The Bridge syncing capabilities might be pushed as a convenience to end users, but in a lot of ways, it’s really in place to satisfy everybody but the person using the PlayBook itself. Although we can stand back and see from an academic perspective why RIM’s decision to use Bridge makes sense, the fact is it seems like the end-user was at the bottom of the food chain when it came to PlayBook 1.0, and for a lot of people that will be a huge turn off – I know it is for me, even though I use a BlackBerry and have nothing to lose from Bridge.

AT&T recently dropped the price of the 8GB iPhone 3GS to just $49 with a two-year contract. That's not a...