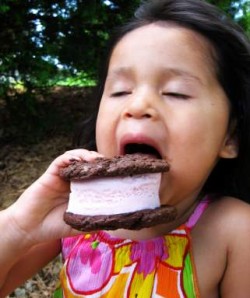 While all the hype is surrounding Android Honeycomb, the next version of the popular mobile OS, dubbed Ice Cream, isn’t completely accurate. According to TechCrunch, and by word of Mr. Andy Rubin himself, the followup to Android 3.0 OS will be called Ice Cream Sandwich.

While I’d rather them leave the Sandwich part out, TechCrunch makes an excellent point as to why they may have slapped on the “sandwich” bit instead of leaving sticking with the more “vanilla” (sorry, couldn’t resist) Ice Cream moniker. When a new version of Android is announced, Google throws in a new statue of the version name. Froyo, or Android 2.2, is nothing more than a bowl of frozen yogurt with some toppings on it. By naming the version Ice Cream, it would be hard to distinguish the two. Sure, there could be some things that would make it easier, but a sandwich will be much easier to distinguish from a cup of frozen yogurt.

So that’s really all we know about this version of Android, but at least something is confirmed. What’s interesting is that there’s already talk of this next-next-generation Android OS. While all the attention is surrounding Honeycomb at the moment, Ice Cream Sandwich is already taking its prominent place of things to look out for.

While we’re not sure what version number it’ll be assigned, let’s hope one part of the recent rumor was correct, and we’ll be seeing it within the next 5 months or so. Whatever Ice Cream Sandwich brings to the tablet, it’ll likely be nice and sweet.

Now that Android 2.3 Gingerbread has been out for about a month, Google is wasting no time in touting how...