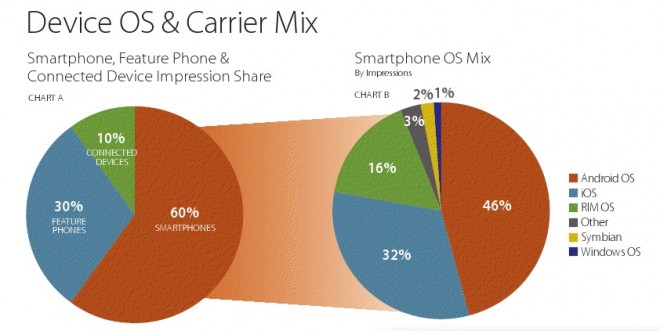 Millennial Media has just released their Mobile Mix report for December 2010, and it’s a good one… for Google and Android OS, that is. Android is taking over the market in the US, as previous reports have shown, and this latest report only helps to solidify this fact. Apple and its iOS have given way to Android.

Of the top 30 mobile devices in the report, Android accounts for 16 of them. The report shows mobile devices, not necessarily phones, as you’ll find the iPad and iPod Touch along for the ride, which have their respectable places in the top ten. As far as top manufacturers go, Apple, Samsung and HTC (in that order) dominated the space, collectively taking in over 50% of the overall market in the US. RIM and Motorola followed the top dogs, still holding more than 10% share each.

As far as smartphone OS’ go, Android has overtaken iOS as the dominate platform on the Millennial network, representing 46%. Google’s OS gained an impressive 8% month over month, where iOS held steady 32%, and RIM trailed with 16%. The ad request shares get interesting with Android as well. Android’s ad requests grew 141% from Q3 to Q4, and since last January, the Google mobile operating system’s ad requests have risen a staggering 3130%. In contrast, Apple’s ad requests grew 12% from Q3 to Q4, and since January has grown 14%. The comparison is unfair since the installed user-base for Apple was much higher than Android in the beginning of the year, so the percentage gained will obviously be lower.

It will be interesting to see the next couple Mobile Mix reports to see how the Verizon iPhone will affect these charts. Of all the carriers, Verizon gained 2% month over month, as did Cricket. Interestingly enough, this was enough for Verizon to surpass the amount of people accessing the Millennial network, compared to people using WiFi, which sat at 19% in December. That 2% was just what Verizon needed.

You can check out the rest of the report by hitting up the link below.

Well, it looks like this app thing is here to stay, as even PBS is jumping into the game. The...