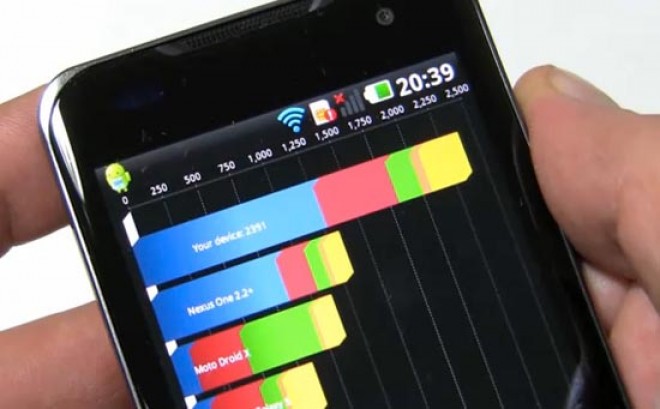 We got to get our hand all over the LG Optimus 2X not too long ago, and now we’re glad to be seeing some benchmarks of the device via Quadrant – and damn is this thing fast! If this is the future of mobile computing (which it i), count me in!

Using the most common benchmarking app Quadrant (pro version), the Optimus 2X just killed it with a score of 2391. Sure, there are other existing devices that can get these kind of scores, but those devices are overclocked to battery-destroying levels. Thanks to the NVIDIA Tegra 2 guts in the 2X, there’s just no need to overclock to hit the 2300+ score range on Quadrant. NVIDIA is poised to explode this year, and their stock already has if you watch the markets. We know that Qualcomm is readying their dual-core CPU, and may announce the beast at Mobile World Congress next month, but for now, NVIDIA is the chipset beast to beat.

A new world is opening up now, as smartphones – as smart as they have been before – are now turning into real mobile computers. With high-end hardware like this, it’s just absolutely mind-boggling to imagine what’s coming to market next year. We’re already ecstatic that LG has stepped up their game in the high-end hardware front. And, even with the low-end, the budget Optimus line isn’t doing to shabby, either.

This isn’t the only beast in LG’s portfolio, either. The LG Optimus Black, which is thinner than the iPhone 4, looks equally as sexy in the spec department. While we don’t know if it will ship with the blazing fast Tegra 2, what it lacks in power, it makes up for in thinness. This may be the first anorexic phone on our hands, as it gets as thin as 6mm at its slimmest point.

So while we’re patiently awaiting these phones to hit the market, hopefully you can drool a bit on these benchmarks for now.

Check out the video below of the Optimus 2X Quadrant benchmark.

We all know that HP will be showing off the much-rumored PalmPad at a press event Feb. 9 but some...