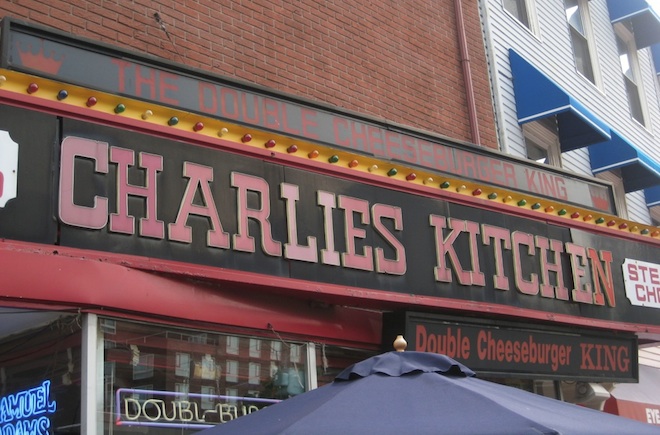 There’s a dive bar in Cambridge, Massachusetts called “Charlie’s Kitchen” that represents everything that’s wrong with where we’re going as a society. It’s not their food, nor their service that offends, but instead it’s a recent computer system called “TextMyFood” that they’ve installed. Say you walk into this place and you know exactly what you want. Instead of taking a few minutes to unwind, enjoy the decor, strike up a conversation with the person who you invited to share a meal with you, you prefer to whip our your mobile phone and send a text message that your server then responds to. Are you kidding me?

Maybe I’m just a little sick and tired of hearing content companies, technology companies, marketing companies, and just about any company selling goods that require a liquid crystal display and a battery to be consumed, but seriously, texting your waiter? To save all of 5, maybe 10, minutes? Kristina Henry, a server at Charlie’s, says: “I would rather want to go to the guest and talk to them face to face and ask them what they would like instead of getting it through a computer.” Jessica Alpert, the NPR reported who wrote this story, says: “I find texting extremely alluring. I message, she arrives.”

Really? You like texting because you don’t have to go through the many social gestures, many of which you may not even be aware you’re performing, to interact with the person who is responsible for making sure that both your stomach and coffee cup always remain full? Here’s hoping that other restaurants in the area enact a “no electronic devices” rule in much the same way that there are already smoking bans. Maybe the comfort of that glowing screen, pumping you full of the latest news from major media organizations and your friends alike, should be taken away from you from time to time.