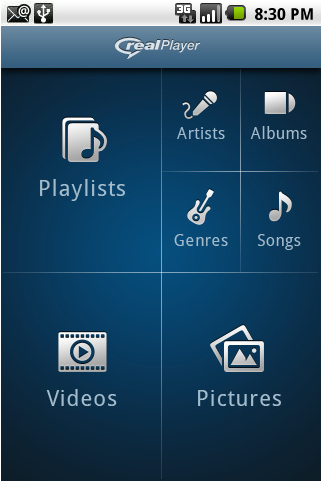 The RealPlayer media client for Android has been updated with a bunch of UI tweaks, plus a new homescreen widget for playback control, support for saving and listening to playlists, options to change video aspect ratios. The nice thing about this particular update is that it was built exclusively based on user feedback.

On top of RealPlayer, which handles playing music, and showing pictures and video, these guys have been getting involved in mobile in a couple of other ways, like providing a mobile video converter in their desktop RealPlayer SP client, as well as having an extensive mobile-friendly music store through Rhapsody.

As phones get bigger screens, wireless bandwidth widens, and local storage expands, apps that can handle and display rich media will become more important, but right now, I would worry that with native gallery and music apps already baked into the Android OS, something like RealPlayer would get a little redundant. Still, if Real can support more formats and offer more functions while staying free, it seems like it could garner reasonable interest for the near future.

Anyone here find their native mobile media apps lacking, and have a particular need for a third-party solution like RealPlayer or VLC?

[via The Real Story]

It looks like there will be a major shakeup at Google, as Eric Schmidt will no longer be the CEO...