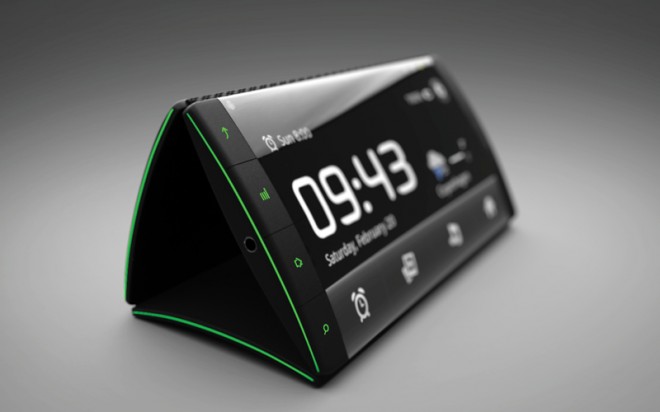 We’ve seen concept phones that range from the very cool, to the downright silly. But, sometimes a concept device comes along that not only looks great, it’s intriguing enough that you want it right then and there. Well, there is a new such piece of vaporware making its rounds on the internet that may never get made, but we certainly wish it would.

The concept design comes to us from the mind of Kristian Ulrich Larsen, and while it may not look like your everyday Android phone, it does look extremely functional. That said, many of the features shown on the video below don’t even exist, like sharing an application with a swipe of your finger. This may be possible in the future, but as it stands, we’re unaware of such features in Android right now. We like that the handset sports stock Android Gingerbread, but it’s really the hardware that makes it shine.

Some may question the use cases of having three screens, but judging by the video, it doesn’t seem so bad. The displays are held together by a steel mesh and fold into each other if you just want to use one screen. The screens are flexible super AMOLED displays that are covered in Gorilla Glass, ensuring that the phone can handle a good amount of wear and tear.

There’s also a full QWERTY keyboard on the back side of one of the displays, making it a texting machine as well. The keyboard also has a camera on it for video-chatting, which may be a bit irritating since you’d have to hold the phone to use the feature.  As you can see from the picture above, the device has no need for a stand, because it can turn itself into its own stand. You won’t find a single LED light to notify you about an email or text message, but you will find that the bottom of the device is lined with an LED strip for your notifications.

There’s really just too much to say about this phone, and the video below does an awesome job as to what this handset is capable of.

Google, please add this to your Nexus line up.

Not to be outdone by T-Mobile and Samsung, Sprint is promising that the Android 2.2 Froyo update is coming soon...