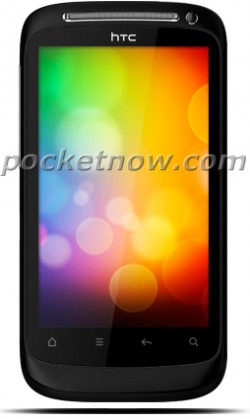 We’ve seen the Desire get its HD sequel and we were pretty impressed, but it looks like HTC just isn’t through with their Desire line just yet. The picture above may actually be what will be the HTC Desire 2.

What basically looks like a black Nexus One with a front-facing camera, the Desire 2 looks sexy in all the right places, and knowing HTC, the device has probably seen some major upgrades under the hood. There’s one thing missing that looks less Nexus One like, which is the trackball. While it’s more of a preference than a necessity, I rather miss the extra navigation method on this device.

While this is nothing more than a render, this does look like a successor to the original Desire, as the device looks to sport a display around 3.7 inches and not the mammoth 4.3 inch screen we’ve seen on devices like the DHD or EVO 4G. That about all we know about the device for now but something tells me we won’t have to wait much longer to get the scoop on this thing.

This is likely anHTC Sense device as well. The original desire shipped with the popular custom Android skin and the DHD followed suit. Plus, if you’d put your hands on a device with the skin lately, you’d notice that the wallpaper on the picture above is that of HTC’s Sense live wallpaper. I’d really like to see this device come in a stock Android flavor as well but that will be nothing more than wishful thinking until we hear more about this sexy handset.

There’s little to know about this device as it stands, but I already want it. Could HTC announce this handset sometime at Mobile World Congress next month? We’ll be there to fill you in if it happens.

After rumors and leaks coming down the pipe for some time now, T-Mobile has officially announced their Samsung Vibrant successor,...