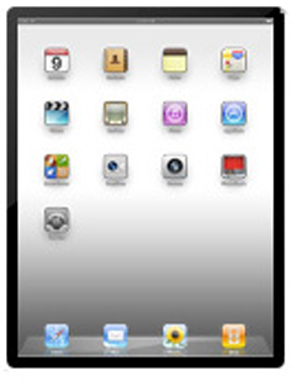 We’ve seen a lot of the first beta of iOS 4.3, the operating system to ship on Verizon’s iPhone 4 on February 10, but the second beta confirms suspicions of another product altogether.

The thumbnail pictured here is used for previewing backgrounds on an iPad in iOS 4.3, and includes icons for FaceTime, Camera, and Photobooth (third row down), which were absent from the original iPad since the thing didn’t have a camera. The calendar icon also shows a big ol’ 9, which some take to be a hint at a February 9 release date, since the old iPad calendar icon showed a 27, and it was announced on January 27. You might have to take that last bit with a grain of salt, since it could just as easily be March 9, or completely unrelated altogether.

There have been hints that we might be seeing a much higher-density display on the iPad 2, but that conclusion is still up for debate. There’s also something dug up in iOS 4.3 about Media Streams, which probably has something to do with social networking, along with multitouch gestures, personal hotspot, something called Find My Friends, AirPlay for wireless media sharing, and lots more, all presumably coming to the next iPad.

Whatever features do end up on the iPad 2, this appearance in iOS 4.3 is a pretty solid confirmation of dual cameras, if nothing else.

Is this the HTC Desire 2?

We've seen the Desire get its HD sequel and we were pretty impressed, but it looks like HTC just isn't...