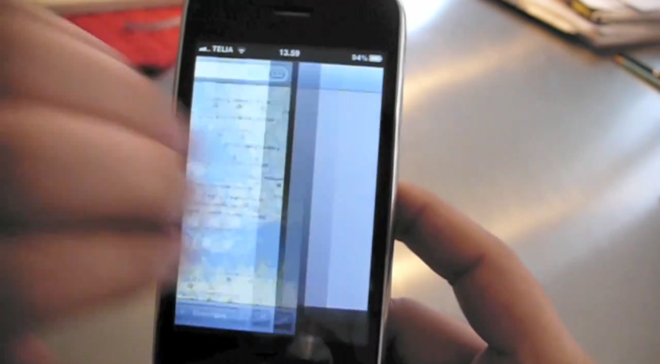 We had seen the iPad run the developer beta of iOS 4.3 with a variety of cool new multitouch gestures on video, but how does the small screen handle it? A fresh video shows an iPhone 3GS handling multitouch app switching in beta 1, app closing, dock actions, and locking the accelerometer. If the whole idea strikes you as too confusing or cumbersome, you can always turn the gestures off in the settings.

Though multitouch gestures are the flashiest additions in iOS 4.3, there are a few more additions, like something called Find My Friends, AirPlay support for developers so they can stream multimedia over Wi-Fi to TVs and Stereos. You can also change what the side switch does now, so it’ll either mute the ringer, or lock auto-rotation. Of course, there’s also the mobile hotspot capability that Verizon is touting on their upcoming iPhone 4.

Personally, it seems a little awkward to try to cram four fingers onto such a small screen, at least the way that guy’s doing it; would it still work if you had your fingers lined up from the bottom rather than the side instead? It definitely strikes me as a more natural way to have your fingers set up.

Although it’s great that the iPhone 3GS can run the update so smoothly, iOS 4.3 won’t be available on the 3G, or iPod Touch 2G, at least not officially. Verizon’s set to launch the iPhone 4 with iOS 4.3 on February 10, after which we can expect a software upgrade for anyone sticking by AT&T.

An iOS 4.3 beta was released to developers recently, and plenty of them started doing some deep digging to discover...