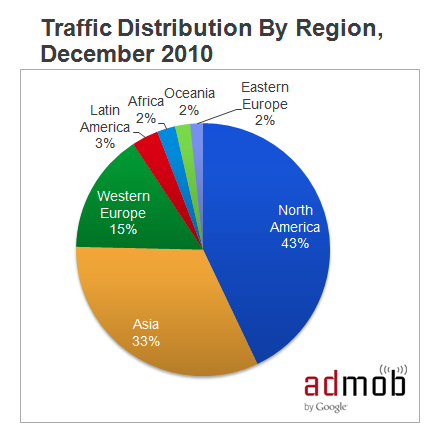 At the start of this year Google said that they now serve over 2 billion mobile ad requests per day. When we say Google we really mean AdMob, who Google purchased in May 2010. Anyway, people want to know: where are those ad requests coming from? Google has an answer to that question. Turns out that Western Europe, the part of the world that’s supposed to be filled with high end gadgetry, requests only 15% of all mobile ads. The king of the hill is North America, who dominates with 43% of ads being served, and they’re closely followed by Asia with 33% of ads. Oddly enough, both Africa and Eastern Europe share the same sized 2% slice. Latin America isn’t any bigger, just 3% of the pie.

Breaking down the territories even further, India accounted for 26% of the total ad requests from Asia, South Korea has 13%, and Japan 12%. Of note is that South Korea, Japan, China, Singapore and Thailand all experienced over 1000% growth rates during 2010; impressive. As for Latin America: Mexico had a 31% slice of the territory and Brazil had 26%, but Brazil is growing the fastest; 1251% in 2010 alone. In Western Europe the UK takes the lead with 33% of the territory, followed by France with 17%, and Germany with 12%. The top 10 countries in Western Europe all experienced a greater than 400% growth rate in 2010. And finally there’s Africa. Surprisingly both South Africa and Nigeria both had a 21% slice of ad requests, making all assumptions of Nigeria’s economic status a bit questionable.

Now of course these numbers are based solely on 1 ad network, but it’s one of the largest. The huge North American bias shows, but it’s also a sign that there are more Americans using the mobile web than ever before. Remember that only a few short years ago smartphones were a niche product category. Now everyone has an iPhone, Android, or BlackBerry in their pocket.

Believe it or not, there's money to be made in ringback tone advertising. Sure I've heard that those annoying messages...