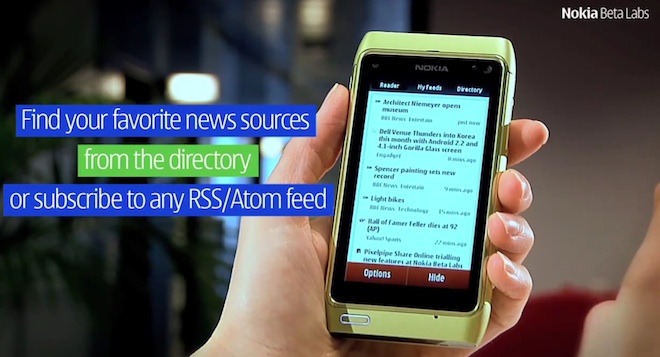 RSS, or Really Simple Syndication, is the addictive technology that feeds that urge inside of you to check up on what’s new in the world. There are many RSS clients out there, both offline and online, with many news junkies heralding Google Reader as the best one, and now Nokia has written their own. It’s simply called Nokia Reader 1.0 and it’s a beta. While the feature list is rather slim, you can only add feeds by typing in a URL manually or browsing through a pre-populated directory, Nokia Reader is meant to show off some of the company’s software innovations. First, the app is written in Qt, Nokia’s latest platform that enables developers to write applications for Symbian and MeeGo devices. From the demo above you can tell it’s responsive and smooth, something that’s rather difficult to do with native Symbian C++. Next, the app uses Nokia’s push notification API. All RSS readers work using the same push/pull method. They go out to the internet every X amount of minutes and ask “hey, is there anything new in this feed?” and if there is then they grab the new content. If not … well, that was a waste of battery life and network resources. With Nokia Reader, your phone only goes online when Nokia says there’s something new on the web.

Give it a go and tell us what you think, but if we had to be really honest, we’d say that you’re better off finding out if your favorite sites have a Twitter account, and then following said Twitter account. If you do that then you’ll be able to consume updates from both your favorite sources and your favorite friends at the same time, likely using a client that’s better written. If you’re on Symbian, grab Gravity. If you’re on the iPhone, grab Twitter’s official app. If you’re on Android, Seesmic is the bees knees. And if you’re really a die hard RSS addict, then you know as well as I do that feed reading is best done on a computer, not on a mobile phone.

The traditionally stoic Apple has opened up another Twitter account to join their smattering of existing iTunes accounts. @AppStore went...