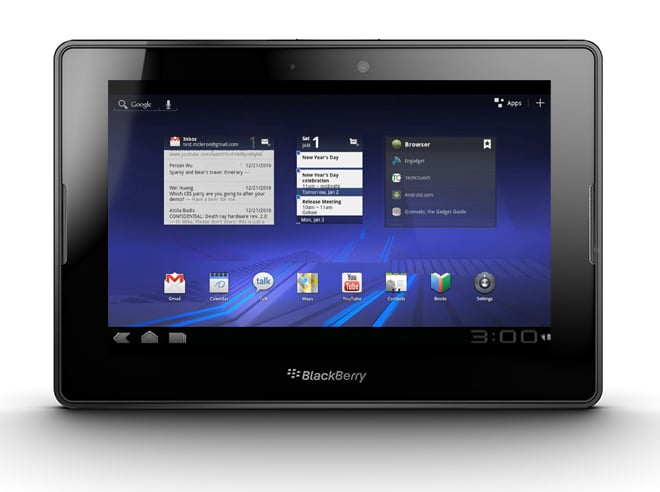 Some old rumours about RIM’s first tablet running Android are cropping up again. The BlackBerry PlayBook will definitely be getting support for Java apps (so your old BlackBerry apps will work on the tablet in some capacity), but the particular virtual machine they use hasn’t been nailed down. According to the latest rumour, RIM may opt for Dalvik, the same VM used in Android, which would mean you could basically drag and drop Android apps onto the PlayBook. If true, this rumour would certainly jive well with what RBC’s Mike Abramsky said earlier this month about the PlayBook supporting an Android emulation layer.

RIM has already shown openness to the idea of accommodating other smartphone platforms on the BlackBerry Enterprise Server if there’s sufficient demand, so the idea of RIM working in co-operation with Android isn’t entirely out to lunch. It’s unsure whether or not this VM choice would lead to a full-blown partnership with Google, or just an interesting back-door for hackers to play around with, but one way or the other there’s a tonne of appeal in giving the PlayBook’s excellent hardware access to Android’s massive app selection, especially right at launch when they’ll only have 4,000 or so native apps available at first.

Even if RIM goes with something other than a Dalvik Java VM, both the PlayBook’s QNX operating system and Android are supported by Adobe AIR, which should make porting apps from one to the other relatively easy. Still, the architecture of the BlackBerry PlayBook’s QNX-based operating system seems well-built for multiple kinds of development and app environments, with WebWorks, AIR, Java, and native C being only a few on the horizon. Who knows what else QNX will end up supporting in the long run.

In any case, it’s good to get some added confirmation that the PlayBook might play nice with Android – let’s just hope it pans out, if not at launch, then maybe in a later software update.

We've seen plenty of the Sony Ericsson PlayStation phone, or what we've now learned is called the Play, that this...