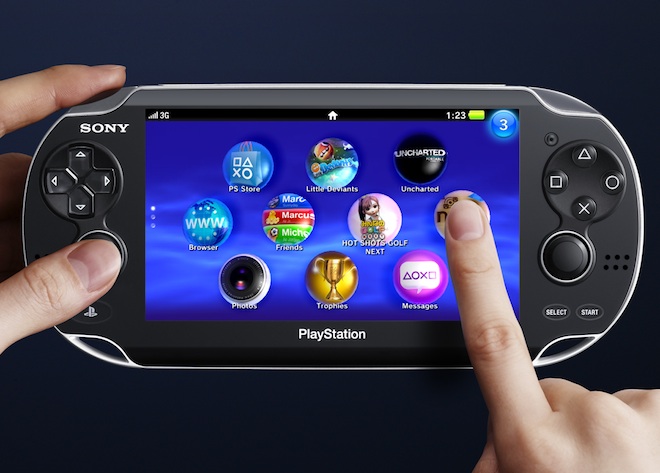 Sony has finally announced the long awaited successor to the original Playstation Portable and it’s called, wait for it now, PSP2. Compared to the first PSP, launched in late 2004 in Japan and early 2005 in North America, the PSP2 has a massive 5 inch touch screen versus the original non touch 4.3 inch and the 3.8 inch PSP Go. Said screen is OLED, so blacks are blacker and power consumption should be lower as well. The resolution will be an eye popping 960 x 544 pixels versus 480 × 272 on the original. Inside there’s a quad core ARM Cortex A9 processor, both 3G and WiFi for internet access, GPS, a touchpad that’s on the back on the device and used to control games, a compass, accelerometer and a gyroscope. We’re a bit surprised Sony couldn’t have managed to squeeze a small camera in there like the Nintendo 3DS. Games are not going to come on UMD discs anymore, instead they’ll be flash storage based, but no further details have been announced.

Now that we’ve got that out of the way, I’d like to ask you guys: do you even care about dedicated gaming devices anymore? There’s no doubt in my mind that the games that are going to be released for the PSP2 are going to be rich, both in terms of graphics and gameplay, but if the past dictates the future then we can safely say that PSP2 games are going to cost between $30 and $40. Games for smartphones may be gimmicky and are meant to be played when you’ve got 15 minutes to kill, but isn’t that enough for the $5 or less that you pay for them? That and isn’t your smartphone with you all the time and can also serve other functions such as being your web browser, camera, and whatever else you want to make it depending on the applications you install?

As someone who owned the first PSP, the first Nintendo DS, and the second generation Nintendo DSi, which I imported from Japan by the way, I should be pumped about the PSP2 … but I’m somehow not.

Update: The PSP2 does have a camera, and not 1, but 2! One in the rear, one in the back. Detailed spec sheet found via PlayStationLifestyle.

What's the weirdest thing you've ever seen anyone try to smuggle through airport security? Perhaps it was some strange animal,...