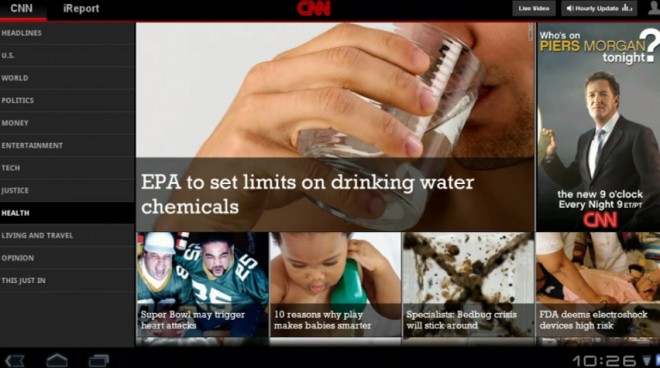 At Google’s Android Honeycomb event today, CNN showed off their tablet-optimized app, and we got some time to try it out. As you might expect, you can peruse various categories of breaking news, like politics, health, and entertainment, including rich graphics and live international video feeds. Up to 350 stories can be seen in the visually-rich layout, that they’re calling broadview.

The more interesting part about the app, though, is iReport, a section CNN reserves for user-submitted news. Through it, you can even submit your own stories and use an Android tablet’s built-in camera to upload pictures or video to the network.

This doesn’t look like too much of a departure from CNN’s polished iPad application, which is a good thing; seeing this should give devs currently sticking with Apple something to think about if they were wondering what the quality of Android tablet apps will be like.

As is, the CNN app will be available for free on the Motorola Xoom, and other Honeycomb tablets as they’re released.

Yet another app shown off at the Android Honeycomb event today was Google's own Body, made to run on tablets....