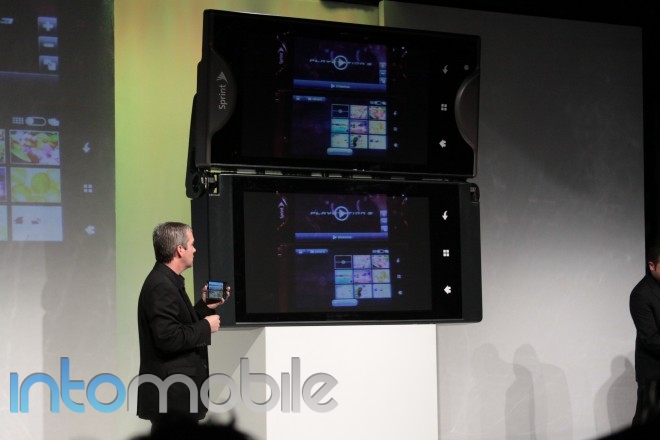 Sprint has officially announced the Kyocera Echo, a dual-screen smartphone running Android 2.2 Froyo. We honestly don’t know what to make of the handset itself and would have been more impressed with something a little more on the 3D side of things, but the Echo is an interesting device nonetheless. The Echo will be available this Spring for $199 on a new two-year contract.

The Echo gives you a full 4.7 inches of viewable screen real estate when the two screens are combined, ensuring that you won’t be running out of space anytime soon. From the looks of it – give or take some physical controls – the Echo seems to be like a Nintendo DS. That said, the Echo is a smartphone and likely functions nothing like the hand-held gaming device, but we’re still wondering why one may need two screens.

One of the cool things you can do with the Echo is run two applications at once. You can browse the internet with one screen, and check your e-mail on the other without having to switch between applications. The Echo makes everyone a power user, and will allow you to get what you need to do more efficiently, if not just distract you more than ever. The companies are saying that multitasking is in the past, say hello to “simultasking.”

One thing is for certain: The Echo better be solidly built. Having two displays can only increase the possibilities for significant damage when the device is dropped. We’d like to see some Gorilla Glass on this thing, as that would put some worries at ease. Closing the Echo will make the two displays face each other, which may be better than having the screens face outward, but who knows how the screens will be affected if something gets in between them when it’s closed.

Held together by pivot hinges, the Echo is one of the most unique smartphones we’ve ever seen and while it’s interesting indeed, we’d like to see a genuine use case for it. And no, something like AT&T’s shoddy GSM iPhone advantage ad won’t do. That said, a lot of people may not even care if the Echo doesn’t  have too many practical use cases, they just know they want two-screens on their smartphone. It may be a gimmick, but it’s a cool one.

Sprint also posted up a fact sheet of the device, and you can find a good chunk of it below. 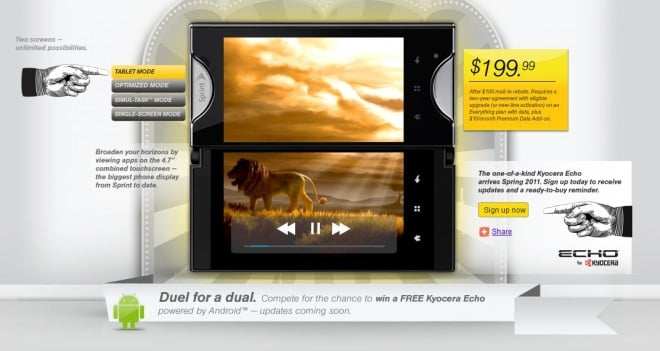 The Echo has 4 different modes you can use it in:

Hey friends, we're coming to you live from New York at Sprint's event and the company is promising an "industry...