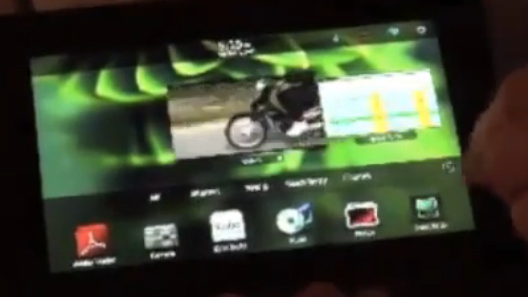 In a recent video demo of the BlackBerry PlayBook by RIM VP David Heit gave us the tour of various ways in which the tablet will be able to connect. We’ll have the Bridge mode we all know and love, which requires a PlayBook be paired with a BlackBerry handset to access any PIM data like memopad, e-mail, and contacts. The other mode is as a VPN device, which will basically let you use your PlayBook as a virtual desktop when securely connected over Wi-Fi. This is a great option for remote workers who need some files from the office, but I’d really love to see this function expanded that would let you use the PlayBook as a secondary computer monitor when you’re set up at your desk.

Another feature will be Balance, or dual-persona, which allows users to buy their own device and use it for personal stuff, while keeping the business side separate and secure. We’ve seen this coming to BlackBerry smartphones in the next BES update, and seeing as how the PlayBook will an excellent multimedia device, it makes sense that RIM is supporting the customer side. There will also eventually be a full-blown enterprise-managed mode, presumably once the 3G and 4G versions are out and enterprise IT admins can remotely wipe the device from anywhere if needed. That probably means the PlayBook will also get its own PIN number and access to push e-mail without needing a BlackBerry Bridged to it.

On paper, the BlackBerry PlayBook looks great: it has a 7-inch 1024 x 600 display, dual-core 1 GHz processor, 1 GB of RAM, 5 megapixel camera on the back, 3 megapixel camera on the front (both capable of HD video recording), Wi-Fi, Bluetooth, HDMI-out, and stereo speakers. The tablet runs a whole new OS built to handle multiple high-end apps at once while staying stable, but being brand new also means that app selection won’t be quite up to snuff with the competition. In the video below, Heit confirms that the PlayBook will be out before the end of Q1 (March), and recent leaks suggest the 16 GB version will go for $499.

Some of these new modes are no-brainers, but I’d really like to see the VPN in action. Maybe RIM will be showing off some new features of the PlayBook at Mobile World Congress next week…? The video demo is below, in full 360p glory.