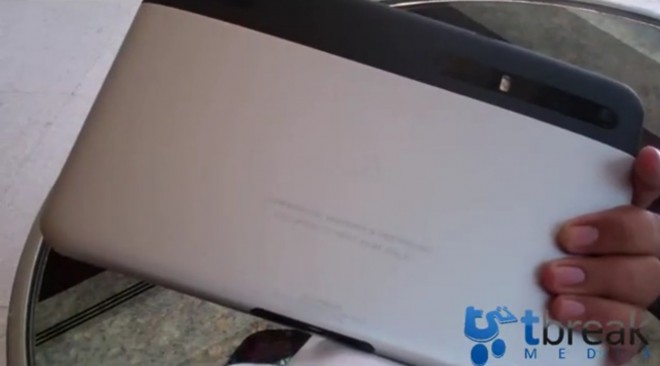 The Motorola Xoom isn’t even available yet, and we’re already hearing about upcoming variants that are on the way. Recently a silver version of the tablet was found in the wild and now there are confirmations of WiFi-only and GSM versions.

We can only hope that the GSM versions will support 4G networks out of the box, as T-Mobile and AT&T have most of its HSPA+ networks rolled out nationwide at this point.  The video says that the silver version supports HSPDA, so users may have to get a hardware upgrade like Verizon’s version. While some may be a bit annoyed that they will have to give the Verizon Xoom a hardware upgrade to 4G LTE , we’re glad that they didn’t wait until LTE was fully deployed before we can get the thing in our hands.

To distinguish between versions, Motorola has slapped a silver backing onto the GSM versions. We rather like the look of the silver version seen below and hopefully we’ll see some nice cases for it later on, just in case you’re not in love with the color. We’re excited to see some GSM versions out in the wild already but that still doesn’t give a firm date on its release. With the Xoom (hopefully) hitting Verizon shelves this month, let’s hope the GSM versions will follow shortly after.

We’ve already heard that the WiFi-only Xoom is definitely real, but we’re still in the dark about its availability as well. If the tablet is priced at $800, it may leave people waiting for the WiFi-only version, if not choose another tablet altogether. The landscape will soon be flooded with great Android Honeycomb tablets, as well as other competing platforms, so if the  tablet is too expensive for the majority of consumers, Motorola Mobility may need to drop the price.

If you’re looking into the Xoom, would you rather wait for the WiFi-only version if it means saving some cash?

Motorola Xoom Hands On from Tbreak Media on Vimeo.

We're all really excited to go to Mobile World Congress and check out the Samsung Galaxy S 2 but the...