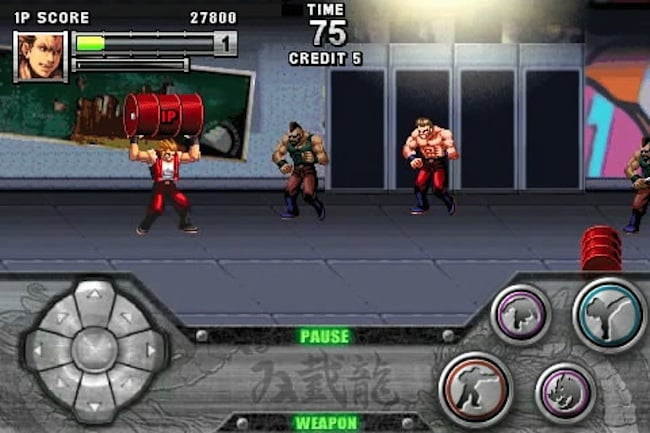 Double Dragon iPhone won’t be an exact replica of the game from the 80s, instead, it’ll have enhanced artwork, music, and a couple of extras thrown in such as achievements, new attacks and new bosses. You’ll still play as Billy or Jimmy as they fight their way through the Black Warriors to rescue Marian, but you’ll also be able to unlock some hidden characters which I’m hoping will be Abobo since playing through the game as him would be pretty sweet. Although, I don’t think Marian would be too happy seeing one of the biggest and baddest characters in the game “rescuing” her.

As you can see by the screenshots, the game will have an on-screen controller placed underneath where all the action will be taking place, similar to how SEGA has been placing the controller in their games. And seeing as how Double Dragon was always better when you played with a friend, you’ll be able to play a local multiplayer game of Double Dragon iPhone over Bluetooth.

I’m hoping Aksys Games can deliver a great Double Dragon experience on the iPhone. A new coat of paint, sounds, and moves all sound great, but hopefully they can get the core fighting mechanics down as that’s what made playing Double Dragon so much fun.

The BlackBerry PlayBook tablet was announced with HDMI-out capabilities, but it hadn't been shown in action. Today, a video demo...