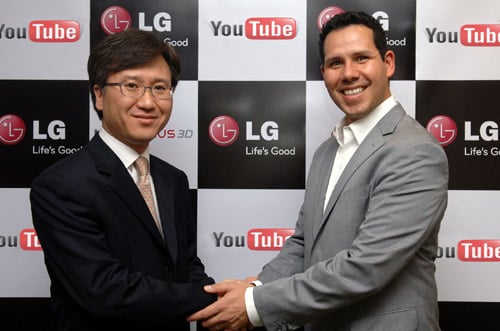 LG kicked off Mobile World Congress with a bevy of products including the 3D-capable Optimus 3D handset. The Optimus 3D includes a 1GHz OMAP4 dual-core processor, 4.3-inch WVGA display, HDMI out, DLNA, and a dual-lens camera capable of recording 3D video. The Android smartphone is optimized for 3D playback as well as recording and features a display that lets you watch your 3D movies without the need to wear those geeky 3D glasses. It is also chock full of video playback goodness, offering four times more video codecs than other competing handsets.

Besides its 3D video recording and playback, the Optimus 3D will include a specialized version of YouTube that lets LG owners upload 3D content directly to YouTube. LG worked directly with YouTube to enable this functionality on its premium line of  Android smartphones. Both the handset manufacturer and YouTube are touting this feature as it will take 3D content creation out of the exclusive hands of Hollywood movie studios and place it in the hands of consumers. Hopefully, the quality of the 3D recording lives up to the hype (though we realistically do not expect a Hollywood movie-quality experience). We should get some hands-on time with Optimus 3D later today and may be able to touch upon this 3D feature as well as other aspects of this upcoming Android handset.

The Android-powered Optimus 3D will be available globally starting in Europe early in the second quarter of 2011. Full press release with information about LG’s partnership with YouTube is available on the second page.