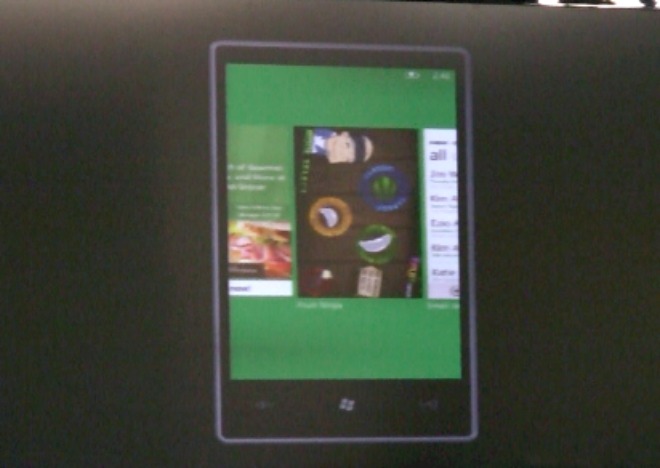 Microsoft talked about its Windows Phone 7 update at a keynote in Mobile World Congress and the company was kind enough to give us the same demonstration that it delivered there.

Currently, Microsoft Windows Phone 7 devices can’t do true multitasking, as apps hibernate in the background and wake up when you go back to them. That will be changing with the coming Windows Phone 7 update, as you’ll be able to resume an app, as well as move to an app-switching interface.

The resuming of apps is simply done by hitting the back button and bringing up the multitasking interface is achieved by holding the back button. This screen kind of looks like the cards interface on webOS, as each app is represented a small card-like image on the screen. You then swipe through these and tap on the app you want to resume.

The company is kind of remaining coy on how deep the multitasking will go, as we know that there will be fast-app resuming and third-parties will have access to this. We saw a demonstration of Slacker Radio running in the background but the company didn’t say what other types of services will have full background access (like VoIP or others). We’re expecting to hear a lot more at MIX 2011, Microsoft’s developer conference.

The WIndows Phone 7 update also includes a full version of Internet Explorer 9, which includes support for HMTL5. In a quick demo, Microsoft’s Joe Belfiore showed a Windows Phone with the new software blazing through a site that uses the “video” tag with HMTL5. He then put an iPhone 4 next to it and it chugged along slowly with the same page.

The Windows Phone 7 update will also include deep SkyDrive integration in the Office app. This includes a 25 GB of free cloud storage that will be pre-installed on your device once this new software comes through the pipes. That means you can save your documents to the cloud, as well as access other documents in the cloud.

There’s a perception that Microsoft has been slow with the updates, particularly because of the fact that the company promised this update would come out shortly after the introduction. We’re now looking at a March time frame at the earliest and that may be frustrating to some users.

I asked the company if it thought about decoupling some of the main apps from the operating system so that it could improve apps on the device without having to push out a full, system-wide update. Google did this with Android and we get apps like Gmail and Google Maps that are constantly updated even if the firmware itself isn’t. I thought this could allow Microsoft to make its integrated Bing app as good as the one that’s available on the iPhone.

The company said that it has the ability to push out those individual updates without it having to be a massive platform update. So, why haven’t they done that yet? Well, they didn’t really answer besides saying that the recent Nokia Windows Phone announcement may have distracted the team a bit.

Check out the long video below and I apologize for some of the shakiness in the video.