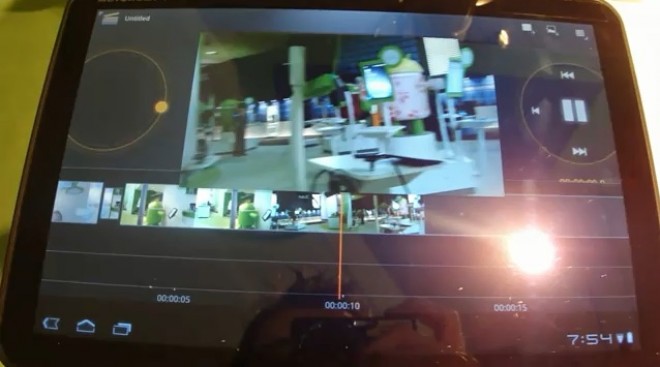 We came away rather impressed with Google’s tablet-optimized version of Android, Honeycomb, but it looks like we haven’t seen everything. During a keynote at Mobile World Congress, Movie Studio was demoed, a slick video editing application for Android 3.0.

Just like the rest of Honeycomb, there looks to be a lot of work put into Movie Studio, as it looks very straight-forward, simple, and sexy. While it wasn’t confirmed, Movie Studio was likely made with Google’s new graphics engine, Renderscript.

The hands on video below was taken by the guys over at FrAndroid, so it’s in French, but you’ll get a feel of what they are saying just by watching the video. The features look intuitive and simple, making it easy for anyone to pick this up and make a video. This is definitely a good thing, as Android can be too complex for some people. Luckily, Honeycomb looks to have tackled that issue in many ways.

It’ll be interesting to see how Movie Studio performs against the iPhone iMovie application, as it has been the only decent video editor around for some time now. Then again, we’d imagine that Movie Studio will be a free application in the Android Market, if it’s not pre-installed.

Video recording was not permitted during the keynote, but there was at least one person who didn’t get the memo, as the official demo from the keynote found its way on YouTube. The video isn’t the best quality, but gives you an idea of the power of the application. The demo shows how to add a soundtrack, transition effects, and how to export the video to 720p and upload it to YouTube.

With the Xoom due out very soon, we can’t wait to play around with Movie Studio. Who feels like wasting some precious time by making some videos? This guy.

If you want to grab the Motorola Atrix 4G but you didn't get around to pre-ordering it, you'll have less...