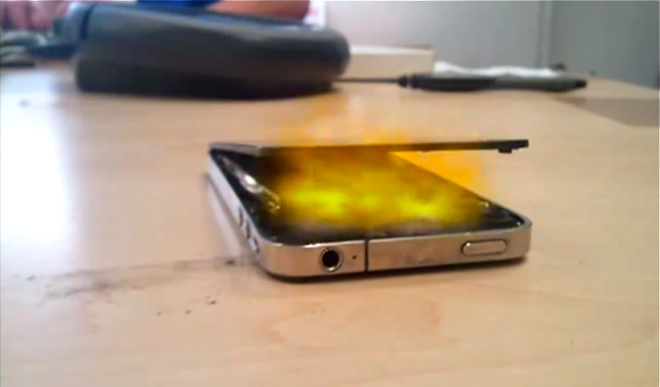 We’ve heard of exploding or fiery iPods and iPhone handsets before, usually resulting in little or no injury, but none have perplexed us as much as this particular case. Why on earth would you put together a video montage of the destroyed iPhone with cheesy flames and explosions around them set to Bruce Springsteen’s music?

The curious fellow wrote to CrunchGear:

The phone got hot then started smoking then blew up. My wife and kid were in the room and it set off my fire alarm. It slighty burned my hand when I tried to pick it up. Basically the battery caught on fire.

It’s a good thing no one was burned or injured by the phone, though we can’t say if anyone was harmed in the production of the video.

Apple will likely replace the roasted iPhone 4, but let this be a lesson to all of you: if your gadget suddenly becomes warm to the touch and you aren’t charging it or running any resource-intensive applications, set it aside for a moment. Sudden and inexplicable heat usually portends dangerous gadget disasters.

Check out the video below, but be warned!