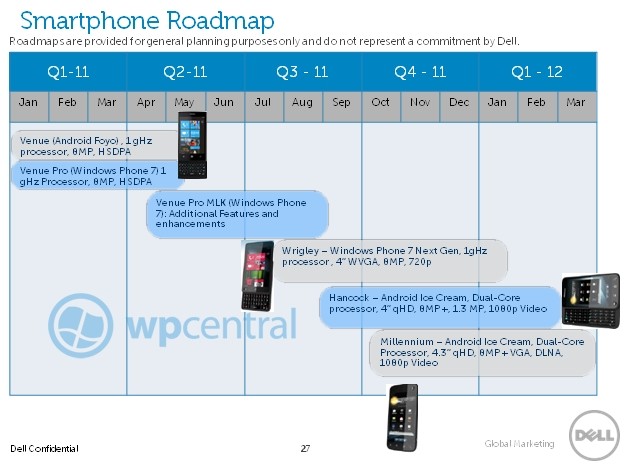 Dell’s roadmap of their 2011 portfolio of products has leaked courtesy of Windows Phone Central and there’s an impressive mix of Android powered smartphones and tablets in there, along with a few Windows Phones coming out towards the middle and end of this year. Let’s start with smartphones: the Venue Pro, which rocks a 1 GHz Qualcomm Snapdragon processor and 8 megapixel camera, is going to get the latest version of Windows Phone. Not the one that has IE9 and multitasking, but the minor update that features copy/paste and a bunch of other small enhancements. In Q3 there’s the “Wrigley”, and that’s supposed to be updated version of the Venue Pro, but with the major update to Windows Phone preinstalled. Why release a new device all together? There’s probably an updated processor in there, but that’s just speculation on our part. In September “Hancock” is supposed to come out, and it’ll be running Android 2.4 codename Ice Cream. Inside it’ll have a 4 inch screen with a 960 x 540, dual core processor, 8 megapixel camera that also does 1080p video recording, a 1.3 megapixel front facing camera, and a QWERTY keyboard. If Dell manages to push something like that out to market, expect everyone else to do the same. And finally there’s “Millennium”, which is a 4.3 inch version of “Hancock” and drops the keyboard. 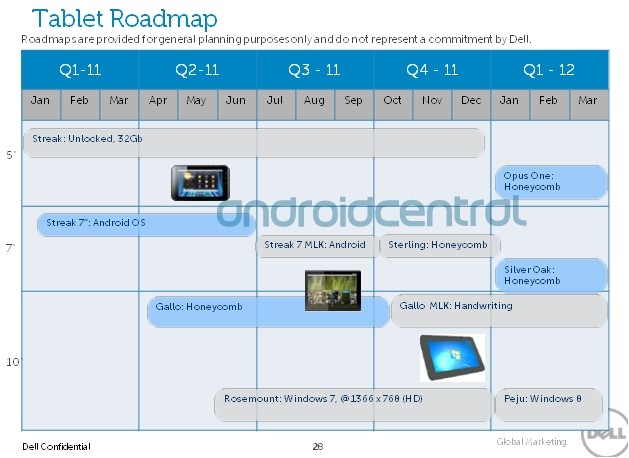 On the tablet side there’s “Gallo”, which should be Dell’s first Honeycomb running tablet. The Streak 7, which is already out, is going to get an upgrade to Honeycomb at some point in July. “Sterling” will replace the Streak 7 in October, but we don’t know what’s actually going to get updated. And finally towards the end of this year we can look forward to the “Opus One” and “Silver Oak”, both running Android Honeycomb.

Whoever leaked this is going to get in a lot of deep dodo.

Those looking for an Android phone that don't want to shell out the big bucks should look to the newly...