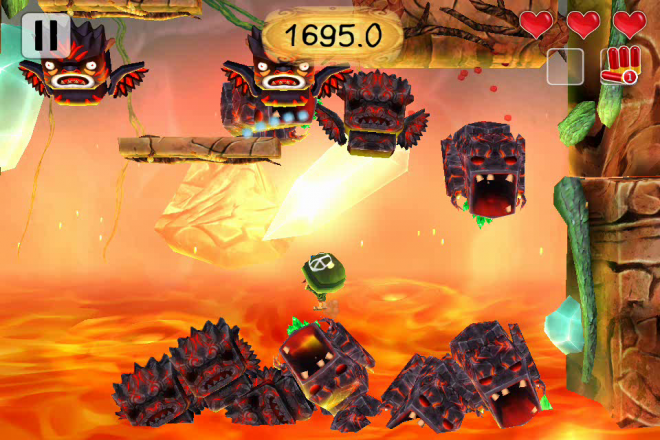 Have you ever felt your twin-stick shooter games lacked originality since nearly all of them take place on a flat surface where you take on wave after wave of enemies until either you die or complete the wave and then die in the next? What about “How high can you get?” games that don’t offer much of a challenge because there aren’t any enemies to shoot up? If you were praying for someone to create a mash-up of a twin-stick shooter with a “How high can you get?” game, then Volcano Escape might be what you’ve been waiting for. Or is it?

Volcano Escape takes much of its inspiration from Minigore as the game doesn’t have much story and as you progress through the game and complete certain challenges, you’re able to play with a number of different characters. Players will be able to unlock 6 characters, but I’m sure more characters will be included through updates. 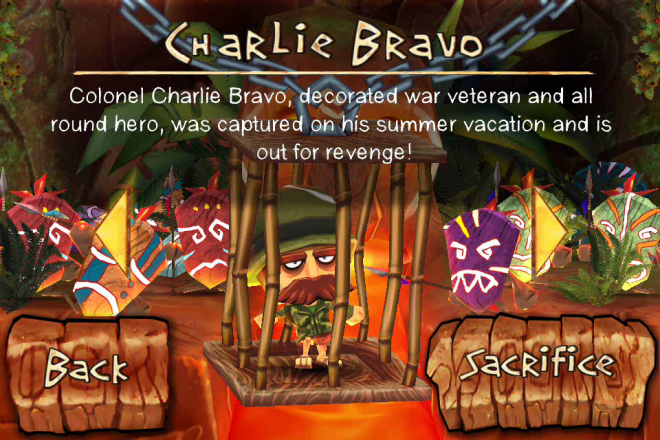 As the name implies, the purpose of the game is to take your character through an erupting volcano in order to attempt to escape it, although I don’t think there is a way to escape. I’m sure if someone decided to tell the characters in Volcano Escape, they certainly would have thought twice about signing up. As you make your way up the volcano, you’ll come across a number of enemies that may or may not get in your way. The shooting mechanic uses a twin-stick shooter scheme in that you use the right virtual stick to dictate the direction of your shots.

Juggling jumping from platform to platform AND attempting to shoot enemies is where I found the game to be challenging, and not in a good way. On one hand, you’re playing a “How high can you get?” game, so the main focus should be on platforming your way to as far as you can get without falling into the volcanic magma. On the other hand, you’re using twin-stick controls to find the right angle to shoot at in order to defeat your enemies, meanwhile, the volcano’s magma is climbing steadily. It also doesn’t help that the game doesn’t give you complete 360 degrees of shooting range, instead, it allows you to shoot at certain angles. If the game incorporated an auto-fire mechanic or something for the player to focus on the jumping, I think the game would play better, but right now, juggling both the shooting and jumping through the volcano is more frustrating than fun. 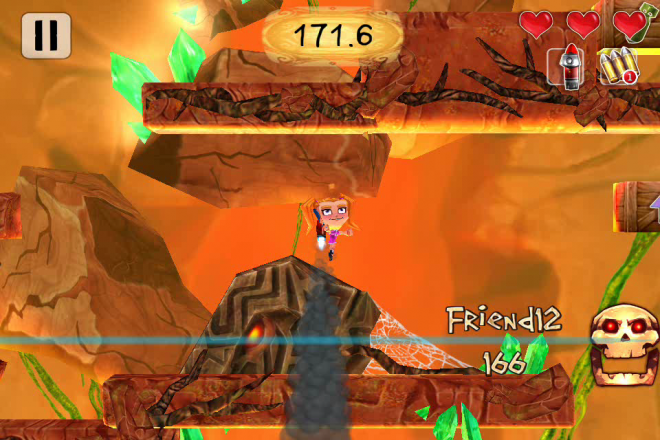 This game isn’t all bad though as the 3D graphics look great, especially on the iPhone 4’s Retina Display. Colors also seem to pop out much more clearly than most games. The game also displays scores from Game Center users by displaying a transparent blue line, their name, and their height and players can also share their score on Facebook and Twitter. It certainly gives the game an extra amount of replayability since you’re always competing against someone on Game Center.

FINAL THOUGHT: The concept of a twin-stick shooter game with platforming mechanics sounds like a good one, but Volcano Escape isn’t what I was expecting. The gameplay mechanics were just too frustrating for me to enjoy this game.

Rumor: Apple to refresh MobileMe and turn your iPhone into a web server

Apple's done some pretty amazing things when it comes to consumer electronics, and iTunes is pretty cool too, despite the...