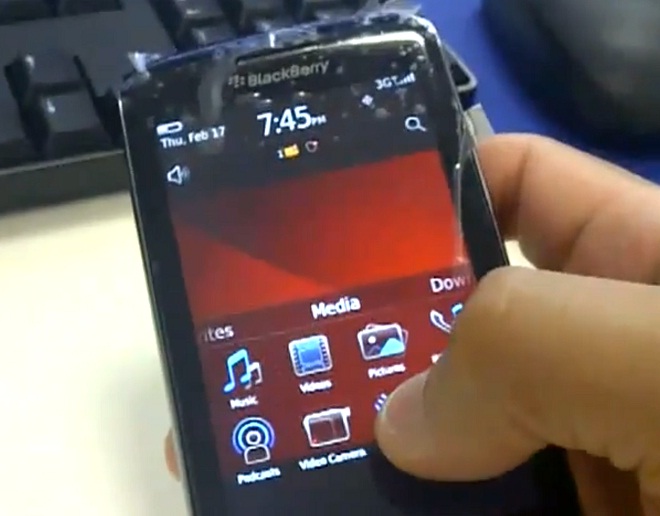 Well, we heard that the BlackBerry Storm 3 (Monoco) was already going into production, so it’s not that surprising to see the thing being put in front of a video camera.

The short video below of the BlackBerry Storm 3 doesn’t reveal much and I wouldn’t judge the laggy nature of the OS just yet because it’s probably a pre-production unit. As you would expect, this is a full touch device that appears to leverage what RIM has learned from the touch-sensitive Torch.

While the specs aren’t official, we’ve heard that the BlackBerry Storm 3 will have a 3.7-inch 800 x 480 WVGA display, 4 GB of internal memory, a 1.2-GHz processor, 768 MB of RAM, 5-megapixel camera, WiFi, 3G with mobile hotspot and GPS. We’ve heard that this may be hitting Sprint in the not-too-distant future, so you can look forward to that if you’re into it.

As for me, I’ve already written off the BlackBerry Storm 3 because of my previous experiences with it. I had the first one on Verizon and the garbage software that was loaded on it left such a bad taste in my mouth. Sure, firmware updates and the future models were more than usable but I just don’t think there is a huge audience for this type of device from RIM.

Still, I have been wrong before and my time with the PlayBook has shown me that RIM is better than ever at touchscreens. But my time with the Torch indicates that the legacy OS is just not perfectly suited for touch, no matter how much they revamp it.

I’m not Simon, so my take on BlackBerry is probably not as well-informed as some of you out there. What do you think of this latest touch-screen device from Research In Motion? Will it find an audience or is it time for them to move on from the Storm brand?

The Verizon iPhone was expected to be a huge and dramatic hit by many analysts, journalists and even AT&T, but...