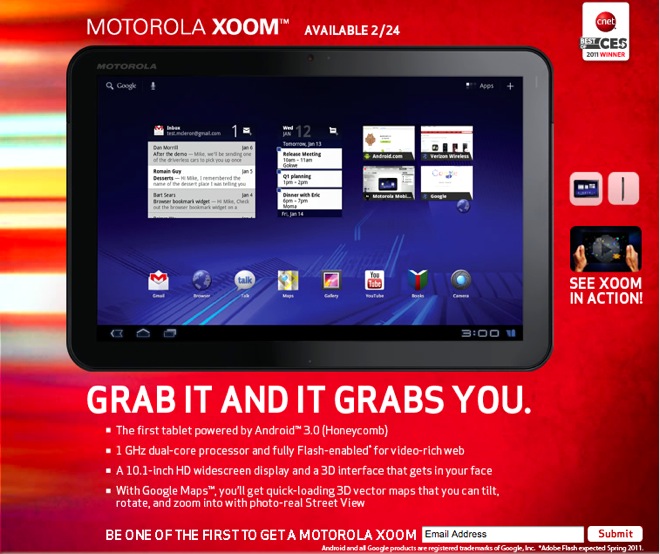 February 24 is shaping up to be a weird day in that there is so much going on at once in the mobile space. The most anticipated Android tablet, the Motorola Xoom, is going to be available tomorrow. The tablet boasts some impressive specs, though it will be launching without Adobe Flash player, and it runs Google’s mobile OS designed specifically for tablets – Android 3.0 Honeycomb. The tablet is a bit pricey, though, at $599 with a two-year commitment and $799 without a contract.

At the same time, Sprint is making a big announcement for an upcoming Windows Phone 7 device – the HTC 7 Pro. It’s not set in stone or anything, but Sprint did tease us earlier with an upcoming phone that will have Xbox Live integration – hmm, what could that be? It would be the first Windows Phone 7 device that runs on a CDMA network, and will presumably be WiMax or 4G capable. This will give prospective EVO 4G and Shift 4G buyers an alternative if they’re on the fence about which platform they’d like to commit to.

To cap things off, the Samsung Captivate is getting the Android 2.2 Froyo update. The long-awaited update has had so many Galaxy S owners in despair, wondering if the somewhat latest version of Android will ever arrive.

Additionally, and this is a bit more iffy, there have been rumors that put the HTC Thunderbolt for Verizon as launching tomorrow. We did have a source confirm this to us a while back, but so far there hasn’t been an official announcement from Verizon. So, if we don’t actually see the device launch tomorrow and become publicly available – we’re hearing there’s a possibility that it may arrive February 28 – we might hear about in some official capacity from Verizon.

Brace yourselves for an exciting day tomorrow, and definitely let us know if you’ll be one of the first to pick up the Motorola Xoom. Feel free to chime in at the comments below.

AT&T has officially announced that the Samsung Captivate will be receiving the Android 2.2 Froyo update starting tomorrow, and to...