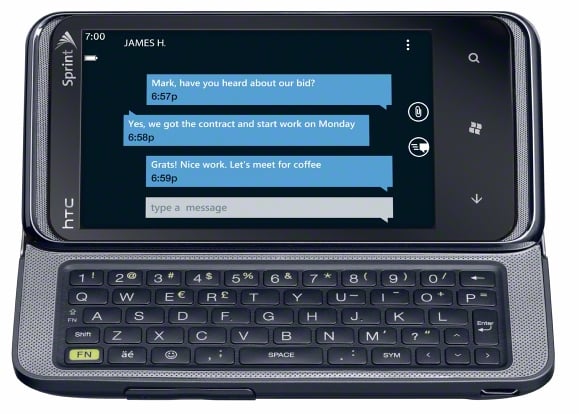 As expected, Sprint has announced their first Windows Phone, which you might recognize as the HTC 7 Pro, but they’re calling it the Arrive. The name change was rumoured last month along with the Kyocera Echo, and doesn’t strike me as a bad move at all.

The Arrive has a 1 GHz processor, 3.6-inch WVGA display, 16 GB of internal memory, Wi-Fi, GPS, 3G, and, of course, a nice slide-out keyboard and a screen that can tilt upwards. It runs on Windows, so you can expect some really seamless interactions with your PC and Xbox, as well as being able to plug into the Zune music service if you’re in the market for an all-you-can-stream subscription.

Sprint had announced back in October that they would be getting the HTC 7 Pro, and though it might seem like they’ve been taking their sweet time getting this phone out, it was only released in Europe in January. By comparison, Verizon has been pretty blasé about Windows Phone’s prospects, while AT&T has been more than happy to pick up the likes of the HTC Surround, LG Quantum, and Samsung Focus, and T-Mobile snagged the HTC HD 7.

The Arrive will land on Sprint on March 20 and sell for $199.99 on a two-year contract after rebates.

A tweet from the Roseville California Best Buy has informed us that the much-anticipated HTC ThunderBolt won't be hitting shelves...