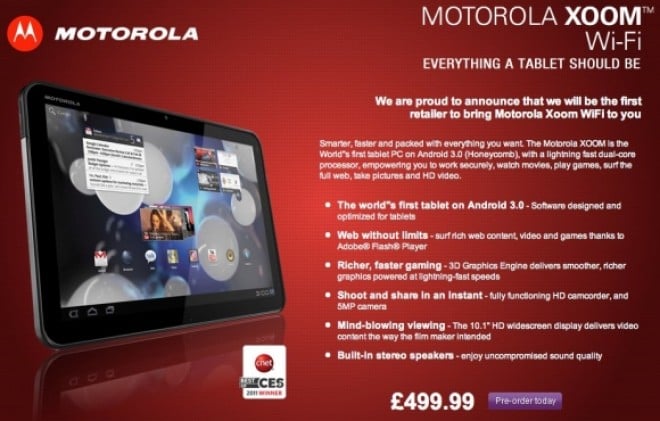 Those of you looking to avoid signing a contract to get a Motorola Xoom may have been waiting for the WiFi-Only version.To that end, PCWorld’s UK site decided to post the pricing of the WiFi version as £449.99 before quickly pulling it offline. Well, it’s made its way back to the site, with a couple of changes. It’s now priced at £499.99 ($691.86).

Everyone seems to want Apple’s success in the tablet space, but it doesn’t seem that pricing considerations have fallen in line. The price point of the Xoom – both 3G and WiFi versions – are significantly more than their iPad 2 equivalents. While I believe that Honeycomb as an OS is superior to iOS in many ways, why would you want to spent so much money on a tablet when you can buy an iPad for less, and get better selection of tablet applications? As long as Apple keeps their application stronghold, it will continue to be a big challenge for Android tablets. Then again, lack of applications certainly didn’t stop Android phone from outpacing almost every other OS out there.

If anything, I would have imagined that the price of the Xoom would have been dropped after Apple’s iPad 2 announcement, not the opposite. With the introduction of the iPad 2, Apple has proved that you can bring a device to market that has equally impressive specifications as the competition, and position it at an affordable price. Motorola, Samsung, LG, you should take notice if you’re looking to get a taste of Apple’s success in the tablet market.

Bashing aside, users will soon have another version of the world’s first Android 3.0 Honeycomb tablet that you won’t need to sign a two-year contract in order to own. The application selection for Android tablets is rather limited at this point, but many existing phone-only Android applications scale well, and a bit more elegantly than iOS applications did for the iPad when it first launched. Still, if you’re looking for a robust tablet app selection for Android, you’re going to have to wait a few months. By that time, we may see more Honeycomb applications hit the street with a lower price and similar specs. We can hope, at least.

While we can expect the US WiFi-only version of the Xoom to be cheaper than the UK variant, it still may leave a bad taste in some would-be-buyer’s mouths.

We were hanging out at the GDC 2011 conference yesterday and got some more time with the Sony Ericsson Xperia...