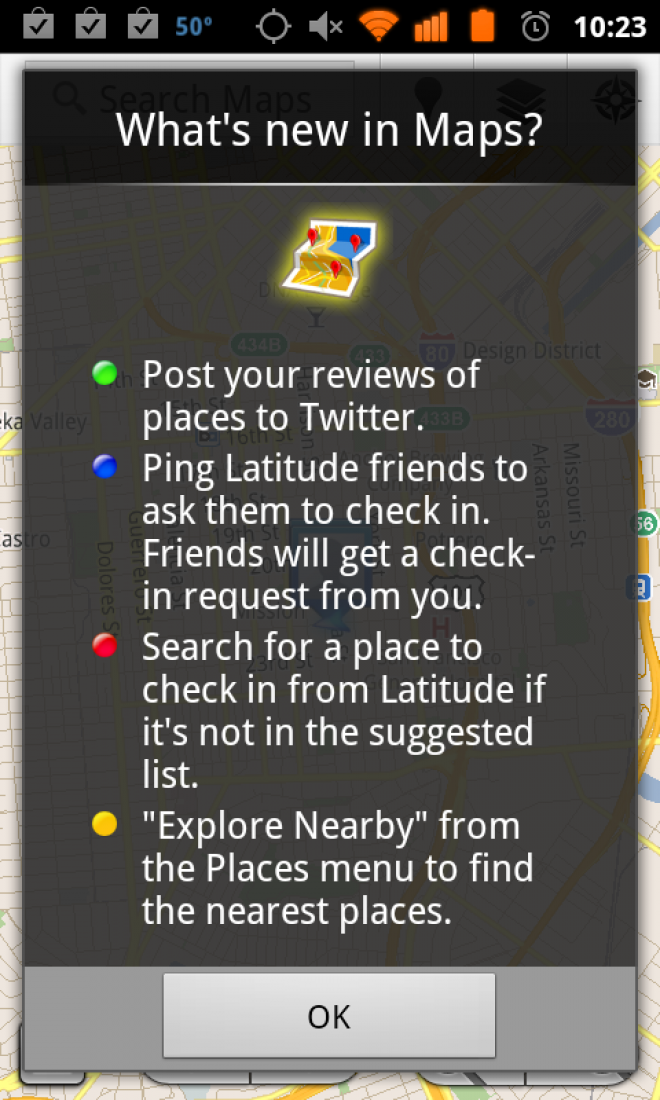 Even if Google Buzz was one of the tech industry’s worst attempts at getting in the social-networking game, the search giant was on point about where to implement it: Maps. The best application of its kind, Google Maps just received an update in the Android Market that brings a couple of new social networking, and more.

Now at version 5.2, Google Maps for Android now allows you to post your Google Places reviews directly to Twitter from the Places app or the widgets provided with Google Maps, there’s also support for Google’s NFC-enabled HotPot service. This way, you can share your favorite dinner spot with the world, with fewer obstacles standing in your way. It’s nothing spectacular, or even new, but we’re still intrigued that Google can still manage to give Maps more features when it’s already pretty awesome on its own.

Another feature is the ability to ping your Latitude friends with a simple request to check in. Users will receive a check-in request from the person who has pinged you, and you’ll then choose to check-in, or ignore it all together. Latitude has very few use cases, most of which are just plain creepy, but we supposed it could be fun for some people. Nonetheless, Pinging someone to check in, creepy or not, may have some benefits on a booze-filled weekend bender with friends to make sure you don’t lose someone along the way.

Sometimes when you’re searching for a places, you’re given results that show everything except the place you’re looking for. Google hopes to correct this wrong by offering more results and giving you the option to “Explore Nearby” in the Places menu to find the places closest to where you are.

Google Maps 5.2 is available for users on Android 1.6 and up, and is available to download right now in the Android Market.

So do you like the new options, or do you rely on another places feature?

Android and iPhone Getting BlackBerry Messenger?

You might have heard that the BlackBerry PlayBook will be able to run Android apps, but what about the other...