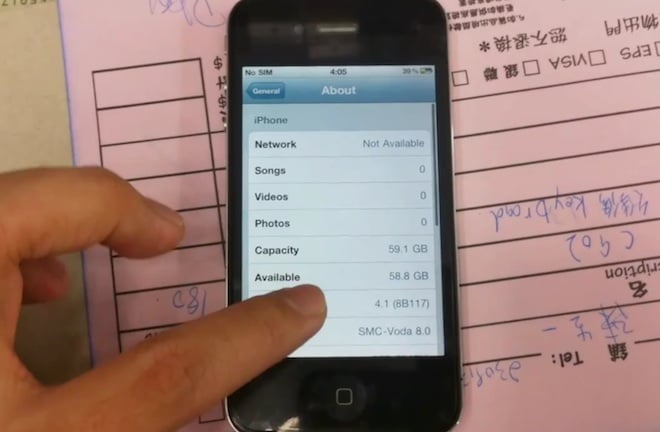 The iPhone 4 ships in 2 sizes: 16 GB and 32 GB. It’s also supposed to ship in two colors, but let’s forget about that for now. For most of us the 16 GB version is just fine since we don’t carry around that music with us while we’re on the go. Thanks to streaming music services and cheap unlimited data plans in Europe, many people just grab their tunes straight from the cloud. But let’s say you’re old school and you’ve got your music library perfectly sorted in iTunes, with full album art and everything. If you have more than 32 GB of music then you’re stuck with having to make a decision as to what to bring with you. That’s due to change if this latest Apple leak out of China is eventually offered to consumers. Someone in Hong Kong managed to nab a few 64 GB iPhone 4 units straight out of Foxconn factory in Shenzhen. With these stolen prototypes there also comes new information that the iPhone 5 may very well look like an iPhone 4, which we’re hoping isn’t true since an earlier rumor suggested the all aluminum back from the first generation iPhone may be coming back.

More space, does anyone care? Whatever happened to Apple’s acquisition of Lala, wasn’t that supposed to be transformed into a sort of streaming iTunes service so users don’t have to worry about backing up their music anymore? We know for a fact that Apple is building a huge data center in North Carolina, and some have suggested that’s got something to do with a revamped MobileMe offering. With the iPad 2 shipping at the end of this week and iOS 5 hopefully being shown off next month, we’ve just got to wait and see what’s going to come out of Cupertino this summer. That being said, more GB isn’t really impressive. Really, it isn’t.