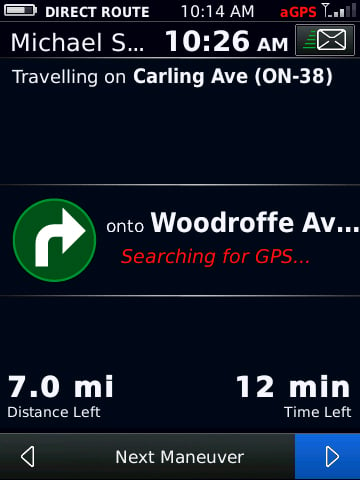 RIM’s free navigation app, BlackBerry Traffic, has had a hefty update to 2.0 in the Beta Zone, which includes some serious user interface changes, a route selection screen, and a new “next maneuver” view which tells you what your next turn should be. You can also check through your search history for previous destinations (handy if you find yourself going between two points regularly), and predict future conditions based on historical traffic data through a new view option. There’s also an Offers screen which I don’t recall from the previous version, which will let you know if there are any businesses nearby that have sales, and offer you directions to get there.

BlackBerry Traffic ties in with RIM’s native Maps application, which, though less feature-rich than Google Maps for Mobile, is much easier on the bandwidth when downloading map data. BlackBerry Traffic creates driving directions based on real-time traffic conditions generated through anonymous location data farmed up from users’ BlackBerrys. This kind of strategy was employed by Dash Navigation, a company RIM gobbled up last year. Based on that info, the app can generate a reasonably accurate estimated time of arrival, and lets you send that ETA to any phone contacts that are wondering how much longer you’ll be.

RIM’s been on a bit of a roll making their own applications lately, and to be honest, they’re some of my favourites. I’ve been using the Social Feeds app that launched with OS 6 more often lately, their official Twitter client is very well-polished, I keep Podcasts stocked with a few shows at all times, and I plan on using the Travel app for CTIA. I’m still not entirely sold on News Feeds until it offers two-way sync with Google Reader. While I’d much rather see Google Navigation on BlackBerry, it’s great that RIM is providing their own solution and keeping it up-to-date. On that note, the app also includes a baked-in option for Bing Local Search; clearly RIM doesn’t feel particularly beholden to Google these days.

To try out BlackBerry Traffic 2.0, head over to the Beta Zone.

Opera has just announced that they're going to launch both Opera Mini 6 and Opera Mobile 11 at CTIA next...