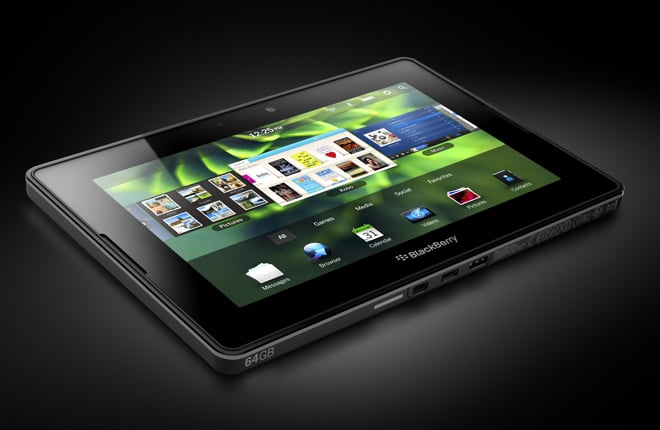 After much speculation regarding when exactly we’ll see the BlackBerry PlayBook, RIM has announced specific launch details for their first tablet. Prices for the Wi-Fi-only model start at $499 for the 16 GB version, $599 for 32 GB, and $699 for 64 GB – more or less in line with what we were expecting. The April 19 launch date at Best Buy and Future Shop, however, is much later than the late March timeframe RIM had been forecasting. Preorders start today for both Canadian and U.S. locations, in any case.

For that money, the BlackBerry PlayBook offers a 7-inch 1024 x 600 touchscreen, a 3 megapixel camera on the front, 5 megapixel camera on the back (both capable of shooting HD video), a dual-core 1 GHz processor, 1 GB of RAM, and a brand new QNX Neutrino-based operating system that can handle multitasking and multimedia with the utmost stability. Wi-Fi, GPS, and 3G through Bluetooth tethering are also included. We’ve got a hands-on video over here if you want to take a look.

RIM has been teasing the PlayBook for the last six months, leaving anyone remotely interested in getting one either impatient or fed up. We’ll have to wait another couple of months for a PlayBook with cellular connectivity, and presumably access to standalone e-mail, calendar, and contacts apps without using Bridge on a BlackBerry smartphone. With rumours of an April 10 launch still lingering, maybe carriers will be offering the PlayBook sooner, but it seems to me like getting this thing before the end of March is a lost cause.

The price points meet the Wi-Fi iPad 2 head-on, but that can be dangerous – will average consumers be willing to pay just as much for a smaller screen and dramatically fewer apps? If you are, you can preorder the BlackBerry PlayBook at Best Buy here.

We're expecting the Wi-Fi-only BlackBerry PlayBook to launch any day now, but a 4G version isn't far behind. A few...